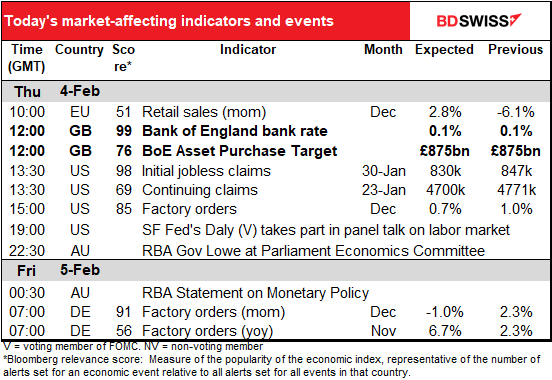 Not much movement on the main currencies: +-0.3% overall is a fairly modest day, IMHO. But maybe that’s because yesterday was a fairly quiet day in other markets too: S&P 500 0.10%, NASDAQ -0.02%. Quite different from the speculative volatility we’ve been seeing recently. The darlings of the retail traders also calmed down, with GameStop up only 2.7% and Blackberry 4.0% (although AMC was 14%). 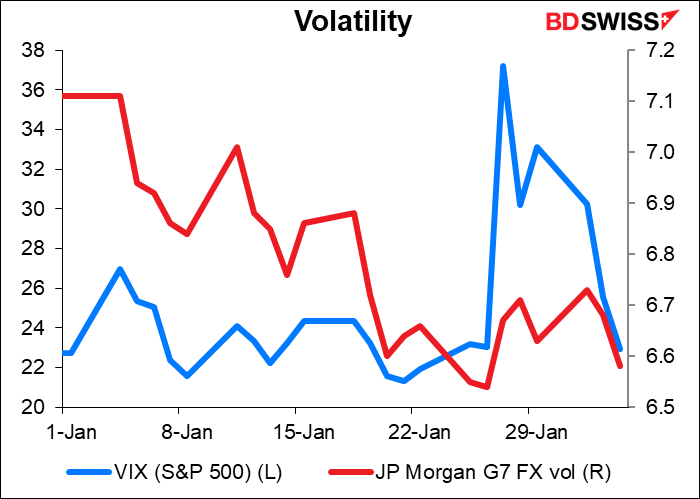 The small movement on the surface of markets masks some important internal movement as the pro-cyclical trade continued. Energy ( 4.3%) and banks ( 1.7%) did well while the yield curve steepened. Oil was up sharply after OPEC issued a communique saying that they “stressed the iportance of accelerating market re-balancing without delay,” i.e. keeping supply in line with demand.

AUD was the best-performing currency, allegedly because iron ore exports hit a record. I’m kind of mystified, because the trade figures for December missed estimates due to weak exports ( 2.8% mom vs 5.8% forecast).The reason the surplus was as high as it was, was because imports fell more than expected (-7.8% mom vs -1.5% expected), which isn’t a great sign for the strength of the economy. Apparently traders were encouraged by the fact that they reported record iron ore exports.

There may also have been some buying ahead of tomorrow’s testimony by Reserve Bank of Australia Gov. Lowe and the release of the Statement on Monetary Policy, which is likely to bring with it upgraded forecasts for the Australian economy. I expect AUD to continue to gain, at least until perhaps we see the latter half of the “buy the rumor, sell the fact” dynamic. 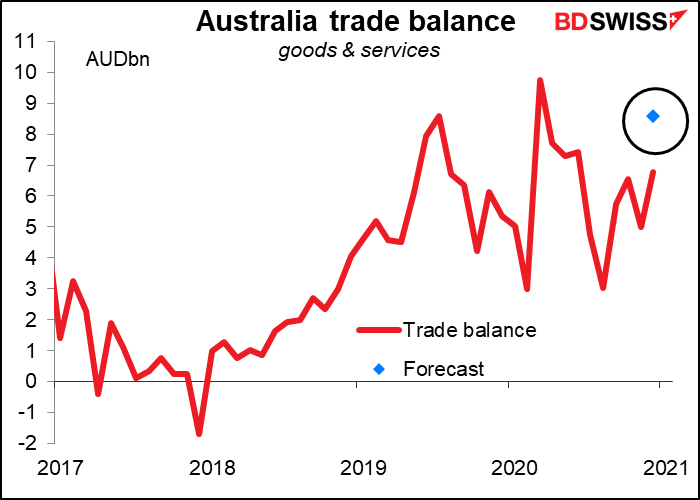 On the other hand, GBP fell ahead of today’s Bank of England meeting (see below).

The day starts with EU retail sales, which isn’t very big. However after Monday’s disappointing German retail sales (-9.6% mom vs -2.0% expected, 1.9% previous) everyone will be waiting to see whether that was just Germany or EU-wide. 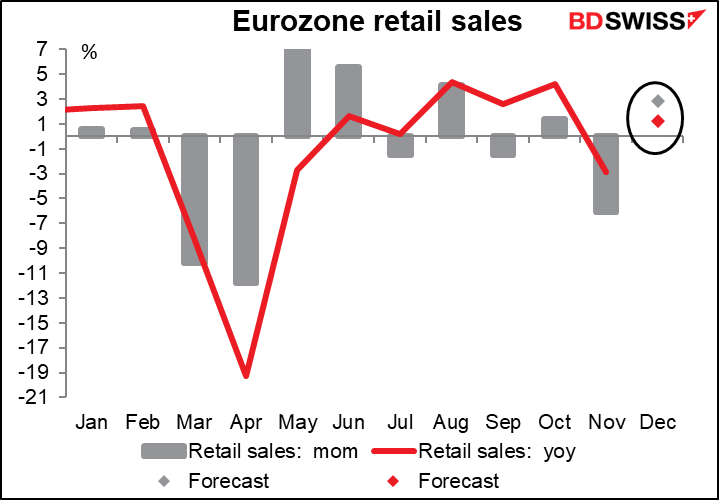 After December’s disastrous showing, Germany’s retail sales (black line) are now below their pre-pandemic level. Yet the consensus forecast is for the December Eurozone figure (blue line) to recover above pre-pandemic levels. One can only hope. 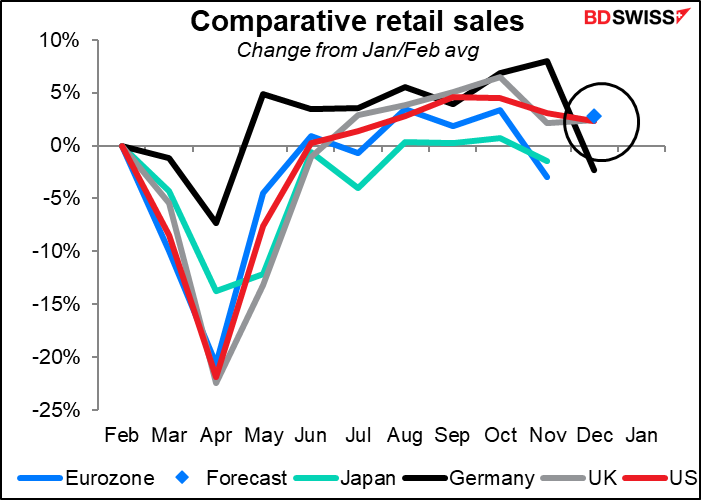 That takes us to the day’s feature, the results of the Bank of England Monetary Policy Committee (MPC) meeting. As I said in my ever-popular Weekly Outlook, I expect that they will vote unanimously to keep policy unchanged again, but perhaps hint at a possible further easing of policy in the future – which would probably be enough to send the pound lower.

The BoE meeting will include an update of their forecasts in the quarterly Monetary Policy Review. Thanks to the third lockdown, they’re likely to downgrade their forecasts. 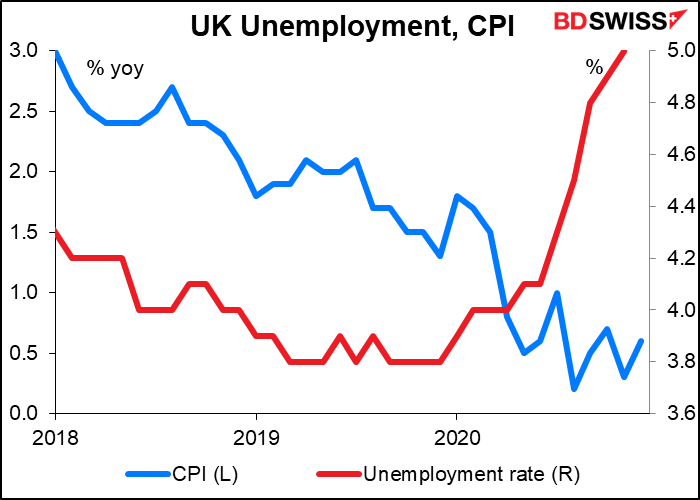 With unemployment rising and inflation below 1% there is a risk that they could have a “mini-cut” from 0.10% to 0.05% (which is where the effective base rate is anyway) or even zero, but I suspect that they will want to hold that possibility in reserve for if and when things get really bad with Brexit.

Instead, I think they could issue a relatively dovish statement, perhaps formally including negative rates in their possible policy tools. For example, in their December statement they said “If the outlook for inflation weakens, the Committee stands ready to take whatever additional action is necessary to achieve its remit.” They could be more specific than that this time, adding “including cutting rates to zero or below,” or something like that. Otherwise, I expect another unanimous vote to keep rates and the pace of asset purchases unchanged for now.

I think that’s probably the market consensus, so what effect the statement has depends on just how dovish it is and what probability they put on further loosening. As the graphs show, on days when the Bank keeps rates unchanged, the day’s range is usually normal. 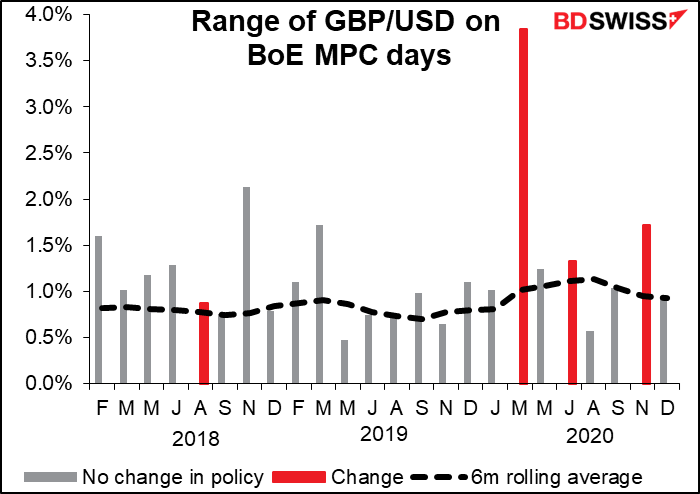 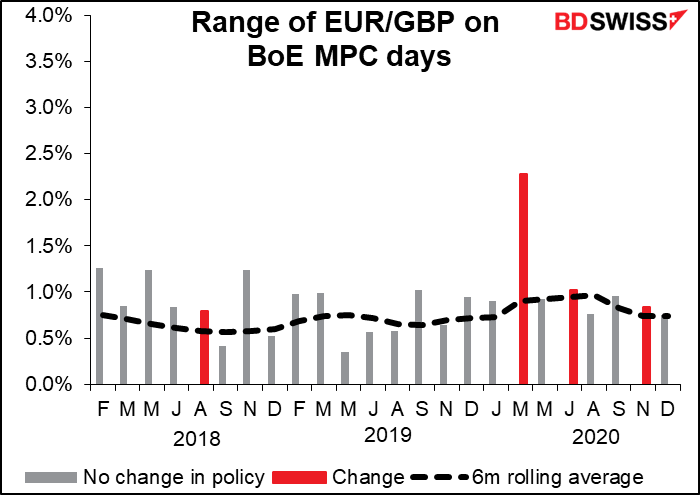 Then we wait a bit for the weekly US jobless claims to come out. The market looks for another pitiful fall in initial claims, which are expected to remain above 800k. 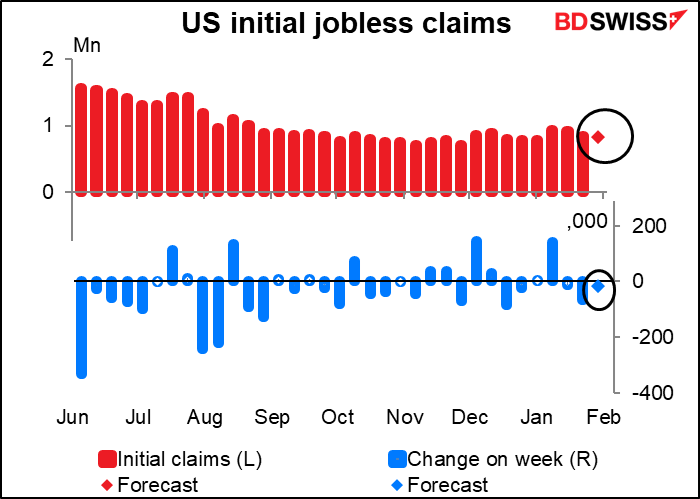 Continuing claims also seem to be bottoming out – not increasing, but the pace of decline has slowed to a crawl. 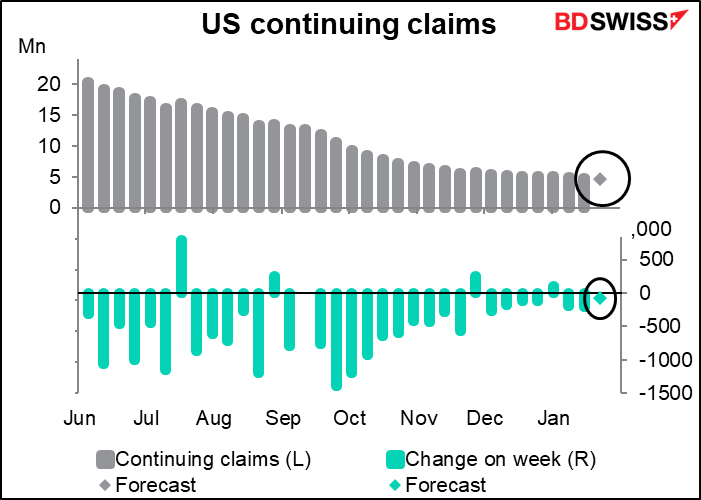 US factory orders are basically a function of the previously announced US durable goods orders, so I can never get particularly excited about them, unlike in Germany, where they’re a big deal. 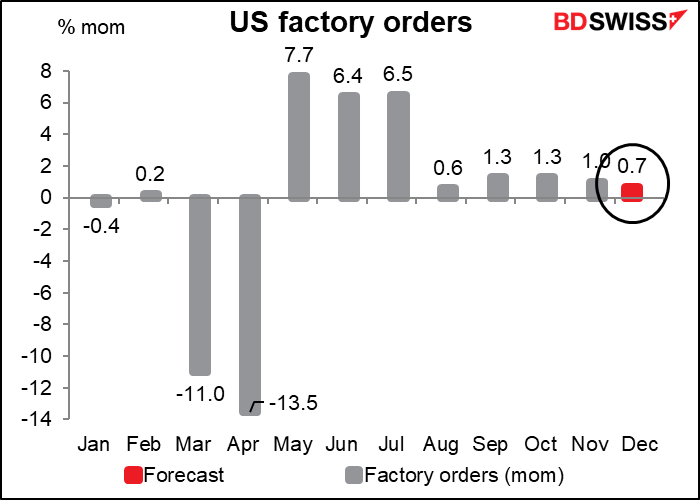 Well well well, speaking of Germany factory orders, they’re going to be released first thing Friday morning. They’re expected to be down mom for the first time since the big plunge in the beginning of the pandemic. 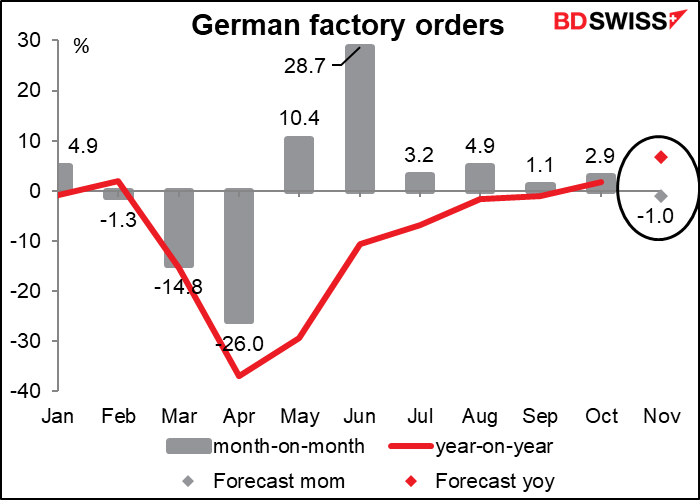 I think that will just add to the general gloom about the Eurozone economy. It is a bit surprising though because the German manufacturing PMI, although off its high, is still at quite an expansionary level. 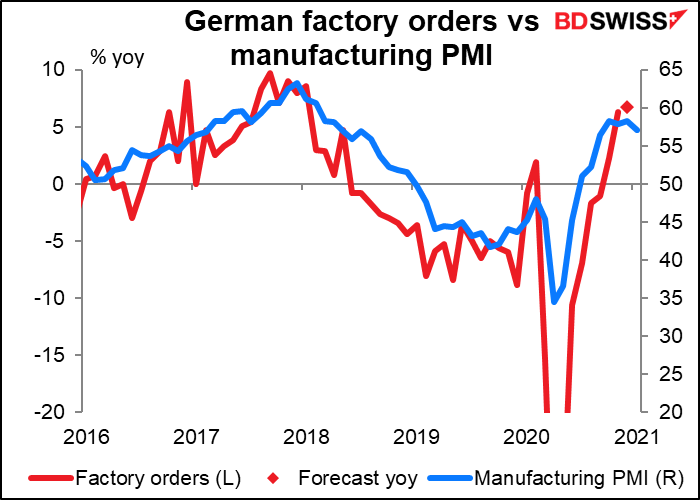 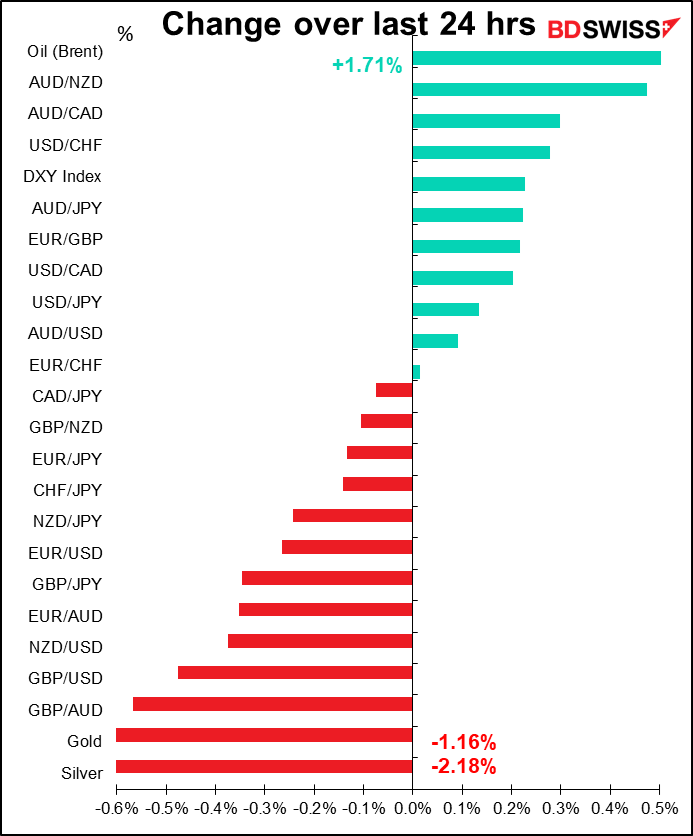