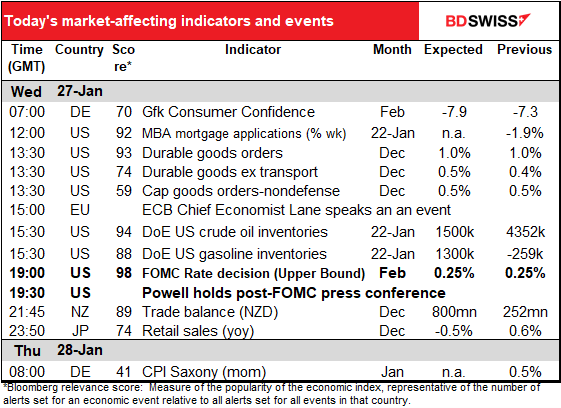 USD & JPY down, commodity currencies up – a typical “risk-on” day, but not particularly in the stock markets, where the S&P 500 and NASDAQ both closed down marginally (-0.15% and -0.1%, respectively).

What drove the market? Hope, basically. The International Monetary Fund (IMF) raised its forecast for global growth this year to 5.5% from its previous forecast in October of 5.2%. This modest increase masks a larger change in the sources of growth, namely they upgraded their forecast for US and Japanese growth and downgraded their forecasts for the Eurozone and UK. They raised their US growth forecast to 5.1% from 3.1%, and even that’s before taking into account President Biden’s proposed $1.9tn stimulus package (which they estimate would add another 1.25 percentage points to the growth rate, apparently). The Japan forecast was also revised upwards by 0.8 ppt to 3.1%, thanks to that country’s stimulus package. But the Eurozone forecast was cut by 0.5 ppt to 4.2%, while the UK forecast was cut 1.4 ppt to 4.5%.

Historically, forecast growth differentials have been a major determinant of currency movements for EUR/USD, not so much for GBP/USD or USD/JPY, though. However all these relationships broke down in March, when the pandemic hit and forecasting became impossible. It remains to be seen whether they can re-establish themselves.

On the other hand, in the past EUR/USD has often weakened when US growth (not growth forecasts) accelerated relative to Eurozone growth, because US imports increased, widening the country’s dreaded “twin deficits.” However nowadays everyone has a ballooning budget deficit and no one pays much attention to trade figures anymore, so I’m not sure that’s going to be a factor in currency markets again any time soon. 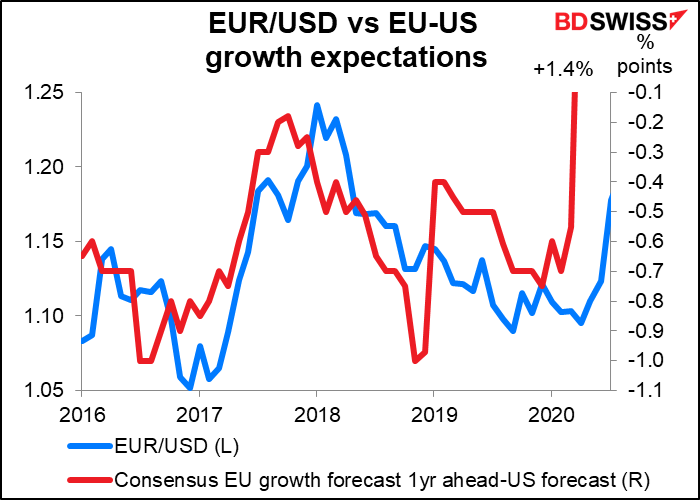 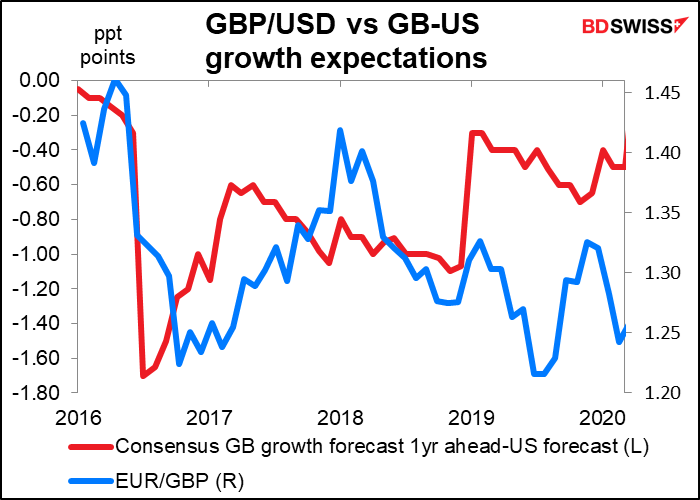 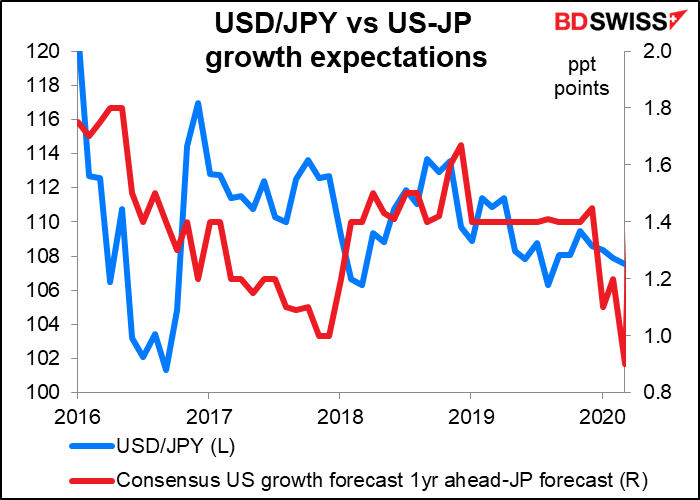 The amazing thing is that this USD weakness & rise in EUR/USD came despite a Bloomberg report that “European Central Bank policy makers have agreed to look deeper into the euro’s appreciation against the dollar since the start of the pandemic, focusing on whether it’s driven by differences in stimulus policies compared with the U.S.” The news briefly reversed the euro’s gains, but it managed to recover.

If the Governing Council decides that yes, it is and that yes, it’s a problem, they could decide to cut rates further, although such a move would no doubt cause anguished cries from the hawks.

They would also catch a lot of flak internationally as the major countries have pledged not to use competitive devaluations to get an advantage (although they would cloak this in terms of monetary policy, not trade policy). Switzerland may be able to get away with this kind of concern over the FX rate because it’s so small, but the Eurozone? I doubt if the US would stand for it.

Besides, the whole issue is just a case of wishful thinking on the part of the ECB. The fact is, the euro is undervalued vs the dollar. Using the OECD’s calculations, fair value for EUR/USD is around 1.45!!! They have no case for weakening it further to meet their inflation goals when that would give them an even greater advantage in international trade. 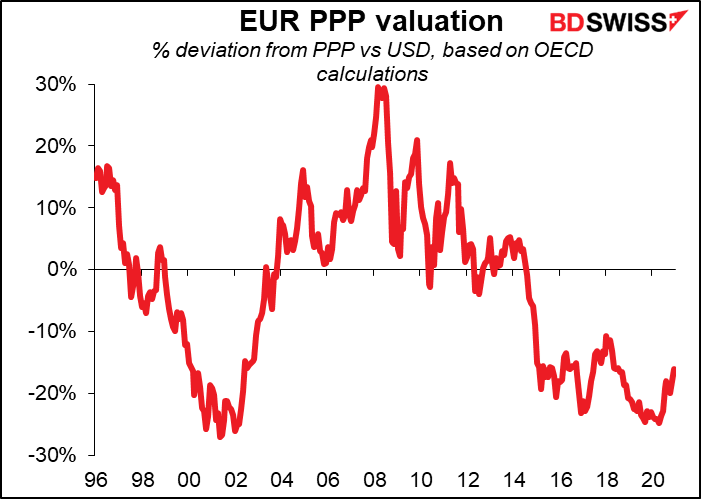 A warning for traders: An recent paper from the National Bureau of Economic Research found that the use of smartphones increases the purchase of riskier and lottery-like assets and chasing past returns. According to one summary of the study, the researchers looked at two major German retail banks that introduced trading applications for mobile devices between 2010 and 2017. They looked at the transactions of more than 15,000 customers and the platforms they used for each transaction. Smartphones increased the chance of buying so-called lottery shares by 67%. Using the devices increases the odds of buying assets in the top 10% of past performance by 12 percentage points. Worryingly, once they start using smartphones, traders also increase their risk on non-smartphone platforms too.

The paper is Smart(phone) Investing? A within investor-time analysis of new technologies and trading behavior

It’s FOMC day! The Federal Open Market Committee (FOMC), the rate-settling body of the Federal Reserve System (American’s central bank), meets today to decide what to do about interest rates and its $120bn-a-month bond-buying program, among other matters. I expect that they will follow the dictates of the Chinese philosopher Lao Tzu, who said “the sage acts by doing nothing” and “when nothing is done, nothing is left undone.” (My philosophy with regards to my floor.)

I discussed today’s FOMC meeting in some depth and detail in my Weekly Outlook, which I’m sure you’ve read (hahaha). You can refer to it again if you want more details. Just to review some major points:

In his press conference, Powell may emphasize this optimism about recovery, but is likely to remain cautious about prematurely considering withdrawing support lest he spook the markets. The big topic will be if, when and whether they will consider tapering their $120bn-a-month bond purchases. He recently stated his view as “Now is not the time to talk about exit …” They just adopted outcome-based forward guidance, which says that they will act in response to certain developments, in contrast to their previous guidance, which was that they would act ahead of or in anticipation of developments. Since the December meeting, initial jobless claims have increased, nonfarm payrolls fell by 140k, and retail sales declined for the third consecutive month. That’s hardly the “substantial further progress” toward the Committee’s goals of full employment and stable prices (= 2% inflation over time) that he said they would need to see before they could “think about thinking about” tapering their purchases. Expect him to repeat the “substantial further progress” phrase and push back against any idea of early tightening. That message, while expected, could still be negative for the dollar.

On days when the Committee meets but doesn’t change rates, EUR/USD and USD/JPY tend to be no more volatile than on any other day, although of course that doesn’t mean there are no short-term movements, particularly during the press conference. 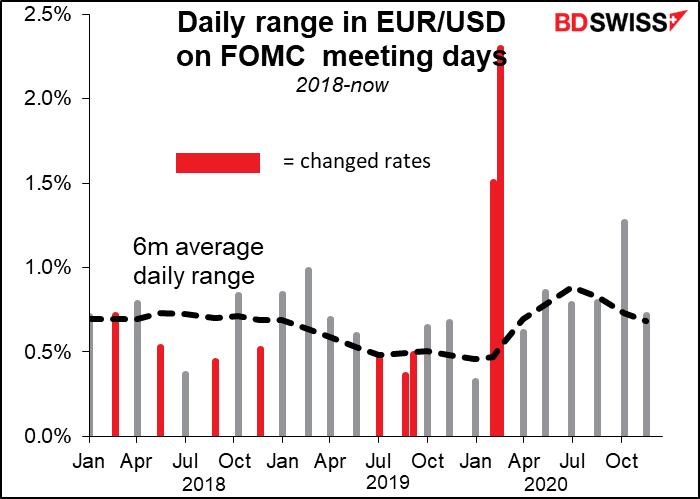 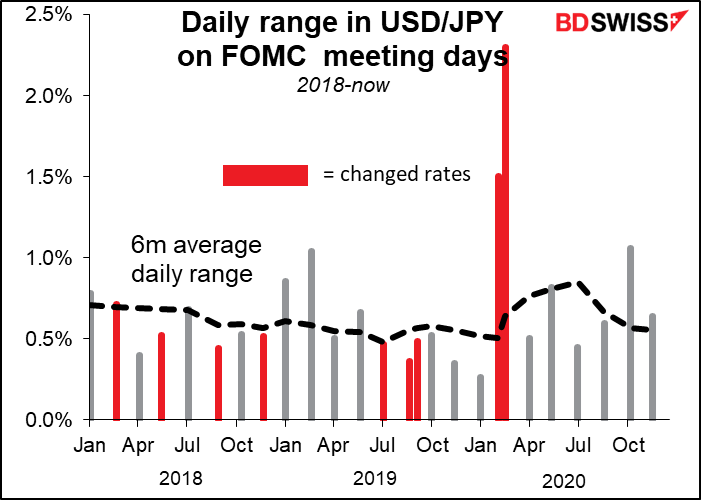 US durable goods orders have held up fairly well, reflecting the fact that the recession has been concentrated in services, not manufacturing. There were two months of big declines but since April, orders have generally risen at a pace not too dissimilar to the pre-pandemic pace. 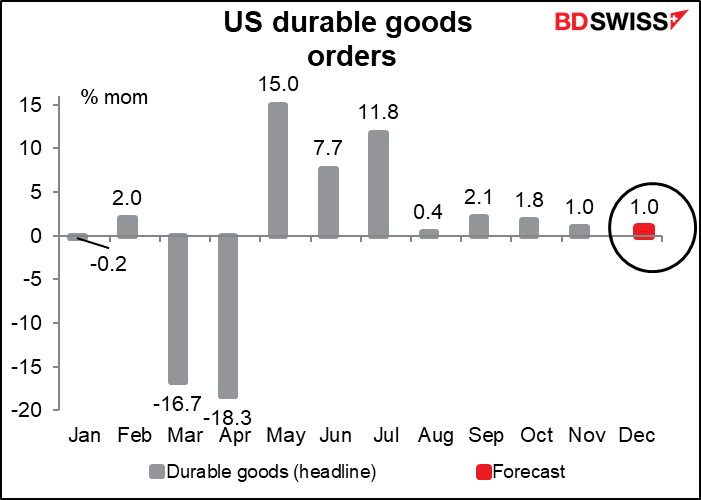 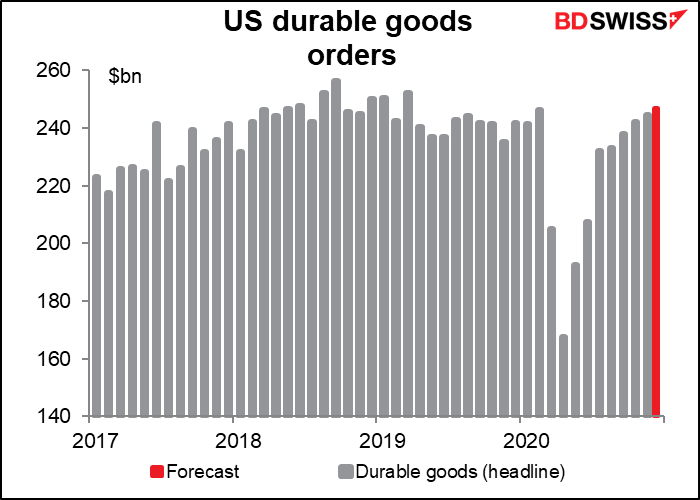 Overnight, New Zealand announces its trade data. The trade surplus is expected to rise further as exports rise and imports fall. The figures aren’t seasonally adjusted, so it’s probably better to look at the 12-month moving average. That too is forecast to move higher. The news should be modestly positive for NZD. 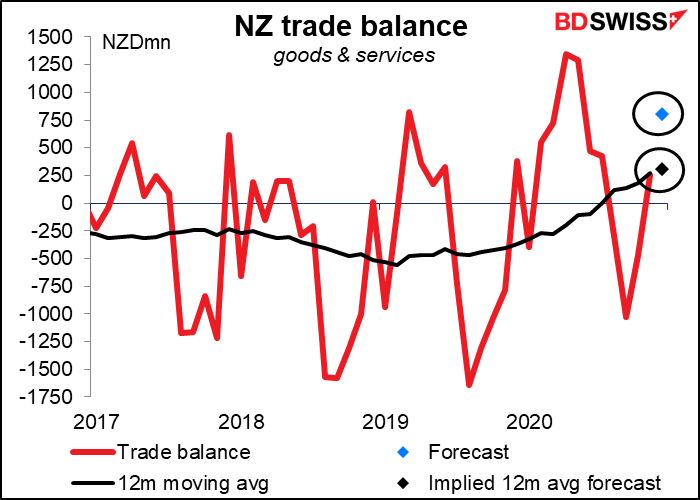 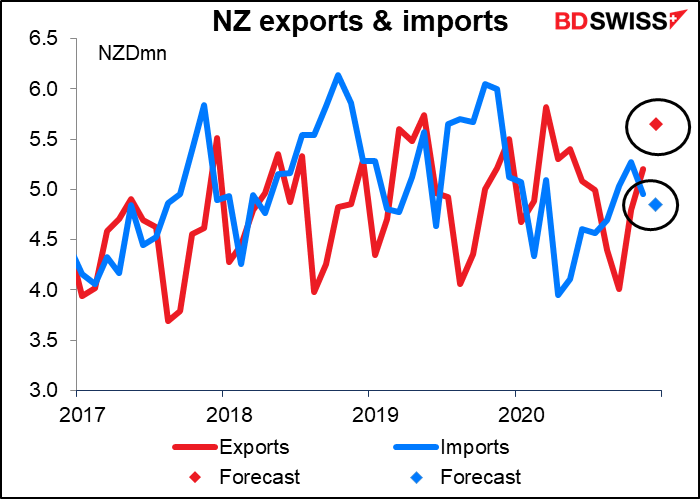 Japan’s retail sales are expected to be down somewhat in December as consumer confidence weakens. The virus toll was increasing in December, culminating in the Jan. 8th declaration of a state of emergency in the Tokyo area. 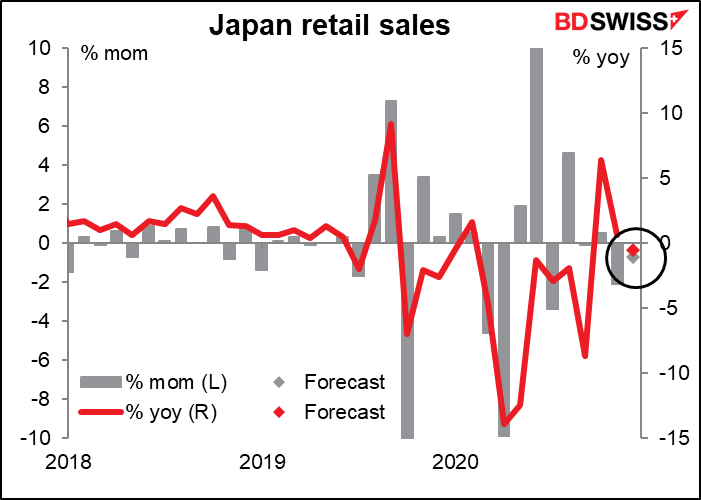 That would still leave sales some 2.2% below pre-pandemic levels.That’s not very good on a comparative basis. Other countries are doing better. Then again, only the US and UK have announced their December figures yet – there’s still plenty of time for the Eurozone to disappoint. 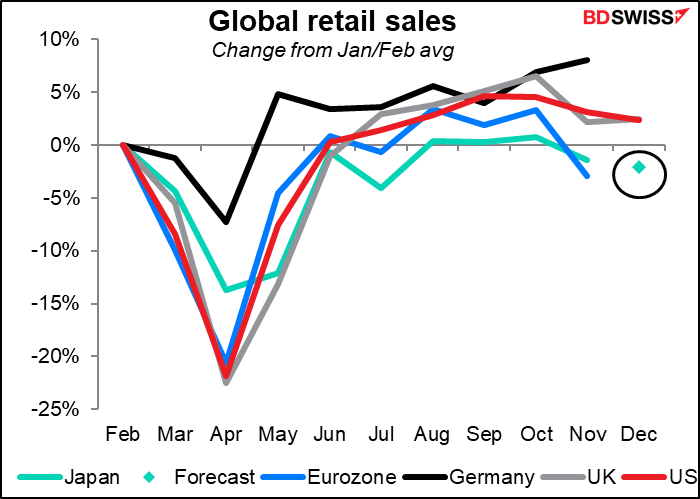 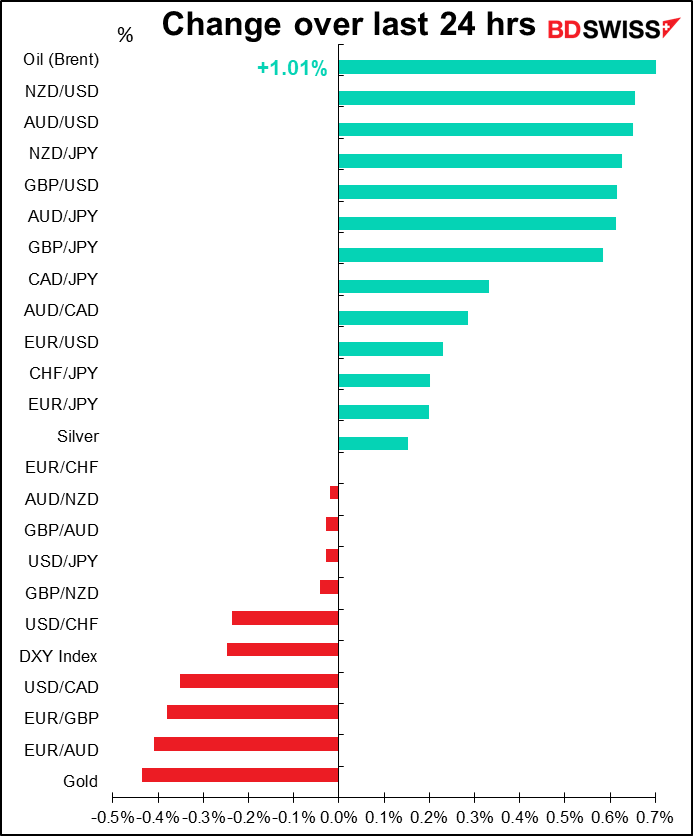