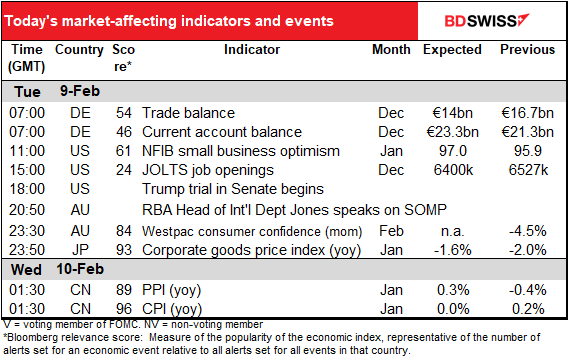 The reflation trade went full blast yesterday as the Democrats started crafting legislation on the fiscal package that they intend to pass with or without Republican support and the slowing virus count in the US spread some optimism. Even Italy cooperated as Mario Draghi won the backing of the main Italian political parties to form a new government. 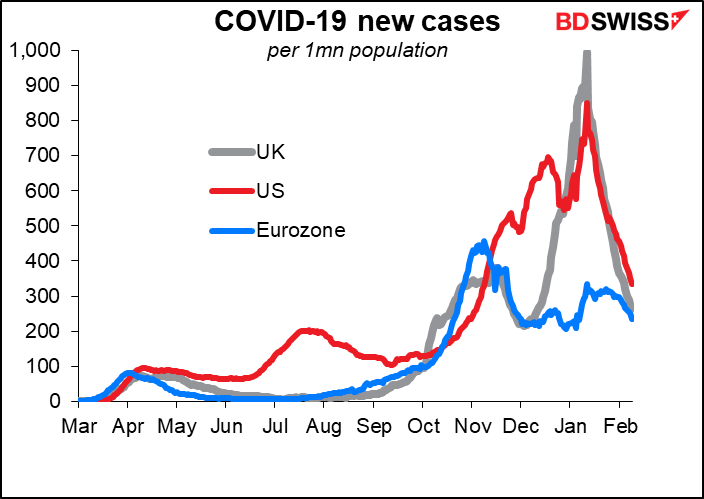 Congressional Democrats in the US yesterday released the first draft text for key pieces of legislation for the Biden Administration’s Covid-19 relief bill. They’ll start committee votes on elements of it later today. They will use a process that enables them to pass it with a simple majority and therefore they won’t need to water it down to meet the objections of the opposition Republicans. That means more stimulus is likely.

Commodity prices continued to rise. Oil hit the highest it’s been in a year, with Brent breaking through $60/bbl for the first time since January of last year. 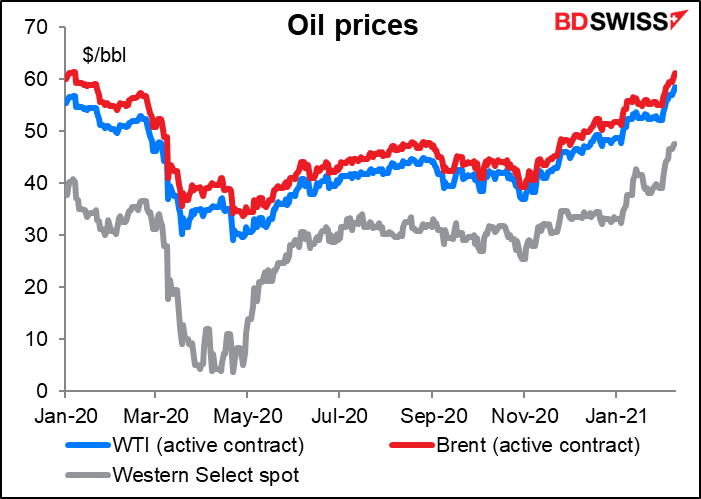 Higher oil prices, higher break-even inflation rates, and the Congressional Budget Offices’s estimate for the January budget deficit of $165bn (vs market estimate of $150bn) pushed the US Treasury 30-year yield briefly over 2% for the first time in a year or so, although it didn’t stay there for long. 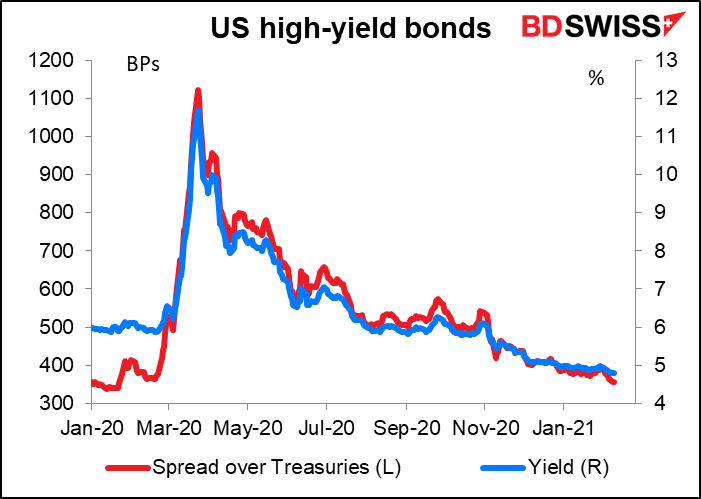 The revival of the reflation trade explains why commodity currencies did so well and why the dollar once again is at the bottom of the list. The anomaly then is why JPY was the best-performing currency in such a “risk-on” market. All I can figure out is technical: USD/JPY failed to hold above the 200-day moving average. But saying that the pair fell because the pair fell leaves me feeling unsatisfied.

The indicators won’t be the focus of interest today – Trump’s trial in the Senate will be. It seems likely that once again those pusillanimous purveyors of improbable prevarications, AKA the Republican Party, will vote to acquit despite their taking a vow “I solemnly swear (or affirm, as the case may be,) that in all things appertaining to the trial of the impeachment of , now pending, I will do impartial justice according to the Constitution and laws: so help me God.” I might also refer to another Republican favorite, the Ten Commandments, the 2nd (or 3rd? depends on your tradition) of which is, “Do not take the name of the Lord in vain.” But maybe that one has had no more success with the Republicans than the one about adultery or bearing false witness…

I don’t expect Trump to run for president again in 2024. I think at the rate he’s declining physically and mentally, he’ll be incapable of doing so by then, if he’s not in jail to begin with. But his trial today does go to the question of, just what will the Republican Party become? And how can the US function if half of the government refuses to acknowledge reality? It’s scary.

The only good that might come out of it: if these people ever gain power again, perhaps they’ll insist on getting and releasing all the details that the US Air Force has about UFOs and Area 51.

Now getting back to the markets…it’s another day of mostly second-tier indicators.

The US National Federation of Independent Business (NFIB) small business optimism survey is expected to be slightly higher, as one might expect with Trump out of office and the vaccine roll-out starting. The hiring plans diffusion index, which comes out earlier than the overall index, was unchanged – not great, but better than declining, as it has been generally since peaking in September. An improvement in sentiment could be a positive for the US economy. 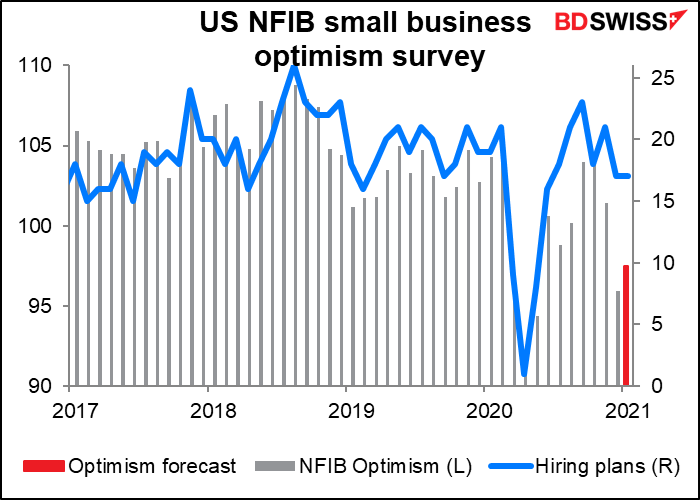 The Job Offers and Labor Turnover Survey (JOLTS) report used to be a biggie when Janet Yellen was Fed Chair and followed it closely – will it come back now that she’s Treasury Secretary? Probably not, because she won’t have the same control over fiscal policy that the Federal Open Market Committee (FOMC) has over monetary policy.

The figures are expected to be a bit disappointing – job offers are forecast to have fallen slightly. Not what you want when unemployment is so high. 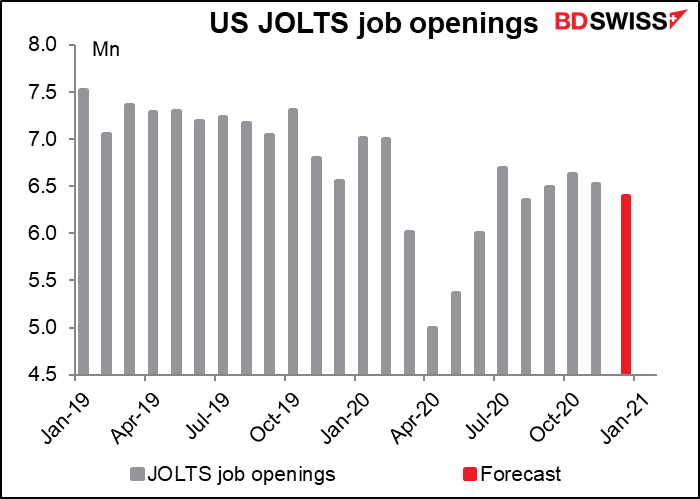 The expected 6.4mn job openings are simply not enough for the 17.8mn persons getting unemployment benefits in January. You can see how big the gap is. In September 2008, when Lehman Bros. collapsed, the unemployment rate was 6.1%. It didn’t return to that level until June 2014. The “labor scarring” may be even worse this time as so many companies have gone out of business. 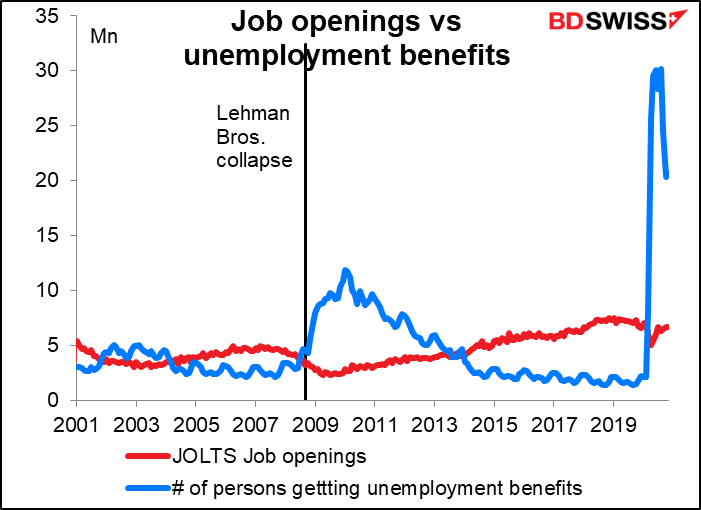 And that’s it for today.

Later during the Asian day, Japan announces its corporate goods price index (CGPI). This is often labeled “producer price index (PPI),” which pretty much describes what it is, but that’s not the official name. (Please note, Bloomberg, because it always appears this way on your calendar.) This is important for companies because the difference between the rate of increase (or decrease) in the CGPI and consumer prices indicates potential change in profit margins. However not so important for FX investors. Nonetheless as it has a relatively high Bloomberg relevance score I include it for your information. 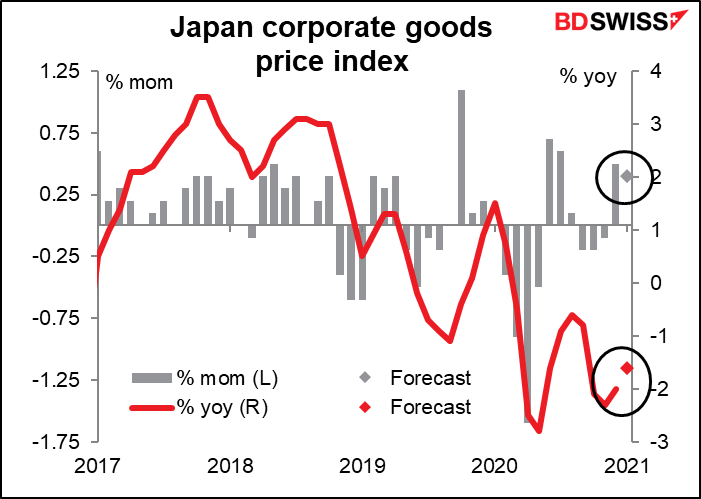 China’s consumer price index (CPI) is expected to slip into deflation, while the PPI is expected to slip out of deflation. It’s an interesting combination and bears watching as the world wonders how the pandemic-induced downturn and the subsequent reopening of economies will affect prices. It was the first country to suffer from the pandemic and the first to exit as well, so we can watch what happens there as an indicator of what might happen elsewhere, remembering of course that every country is different. So far no sign of inflationary pressures at either the consumer or producer level. That bodes well for economies around the world. 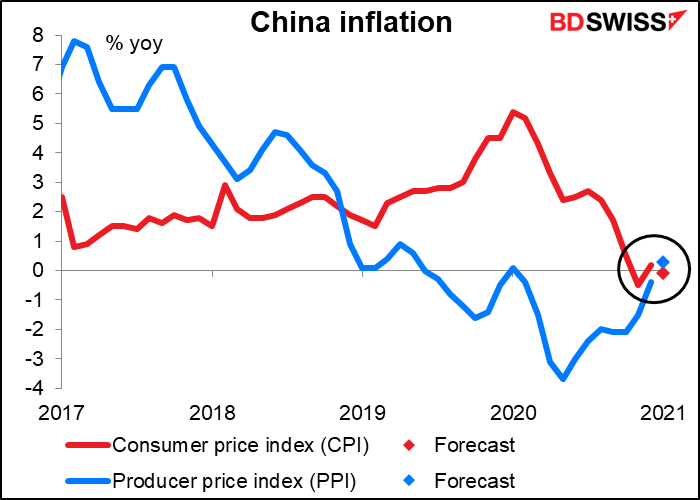 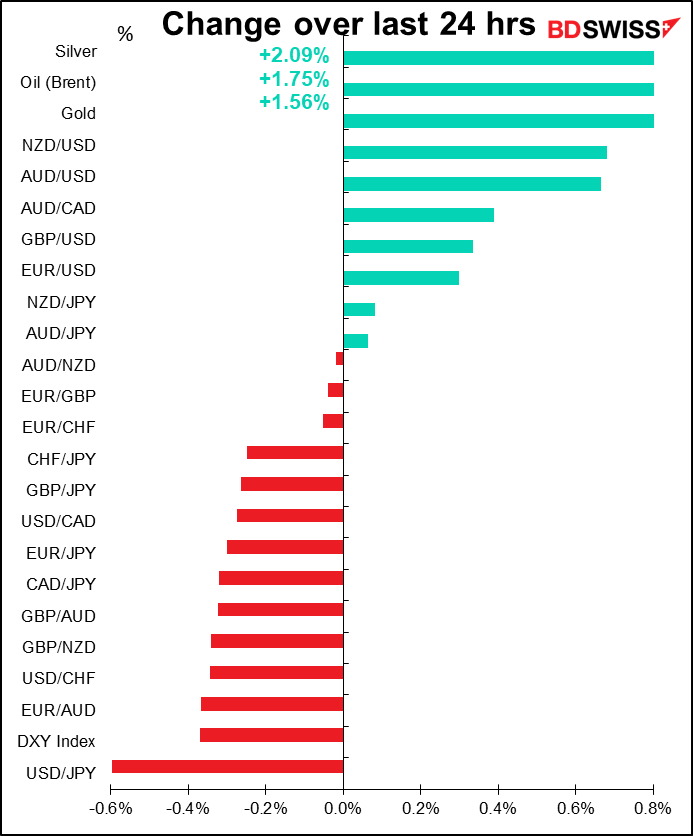 Bitcoin (BTC) and the broader market were back in the deep red on Saturday. A ...
By
3 hours ago