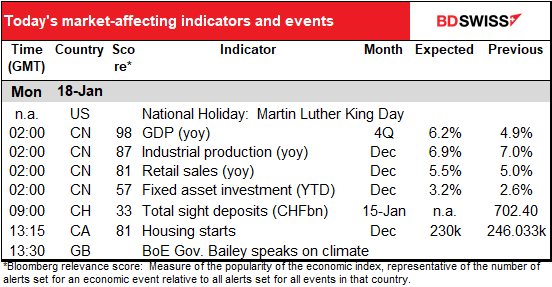 The centrist Armin Laschet Saturday won the election to lead the Christian Democratic Union (CDU), Germany’s large center-right party. This is important because as leader of the biggest political party, Laschet has a good chance to replace Chancellor Merkel at the September national elections and thereby become the de facto leader of Europe (with all due respect to European Commission President Ursula von der Leyen).

Laschet’s chances of nomination for Chancellor depend to a large degree on how well his party does in the two state elections on March 14. If the CDU does well then, he may get nominated. If the party does badly though, then they’re much more likely to nominate instead the more popular Markus Soder, head of the CDU’s sister party, the Christian Socialist Union (CSU).

Laschet is the prime minister of the German state of North Rhein-Westphalia, the country’s most populous state. The favorite of Merkel and much of the party establishment, Laschet is expected to continue Merkel’s policies on fiscal and other domestic issues as well as in European and foreign affairs. He is an ardent pro-European who grew up near the Belgian/Dutch border and speaks fluent French.

As for the September election, the most likely outcome is that the Greens take the place of the center-left SPD in another coalition with the CDU/CSU. Germany’s policies probably wouldn’t change that much, except that the Green leaders are probably more open the SPD to a tougher line with regards to Russia and China and some increase in military spending.

Even if the coalition did change, since most major fiscal decisions would need to be approved by the Bundesrat, the upper house of parliament, where the CDU/CSU would still have a veto, the size of any future stimulus and Germany’s support for its European partners would only be affected modestly.

More on this on March 15 and also later in the summer, when we see how the polls are leaning.

USD is up sharply this morning. There seems to have been a “risk-off” mood in the market, with JPY and CHF also gaining and the three commodity currencies at the bottom, with CAD leading the losers on lower oil prices.

One reason for the dollar’s strength is a report in the Wall Street Journal, which you can read about on Reuters, that says Treasury Secretary candidate Janet Yellen is expected to affirm the US’s commitment to market-determined exchange rates when she testifies on Capitol Hill Tuesday. Yellen, the former Chair of the Fed, is appearing before the Senate Finance Committee Tuesday for her confirmation hearing.

According to the report, officials responsible for briefing Yellen said she is prepared to say, “The value of the US dollar and other currencies should be determined by markets. Markets adjust to reflect variations in economic performance and generally facilitate adjustments in the global economy. The United States doesn’t seek a weaker currency to gain competitive advantage. We should oppose attempts by other countries to do so.”

Yellen’s stance would be a change in appearance but not in substance. This has been the official government policy for decades – at least since Robert Rubin became Treasury Secretary in 1995 (see below). Trump was constantly complaining about how strong the dollar was, but in fact he and his coterie did nothing to weaken it (on the contrary, it hit a multi-year high during his regime). I can’t remember Treasury Secretary Mnuchin ever saying anything one way or the other about the dollar.

However, I do remember some comments from months ago that this was the one point of agreement between Trump and Biden – that they both wanted a weaker dollar. So it is significant that the new administration will reaffirm the US government’s traditional “hands-off” dollar policy. Of course, that doesn’t guarantee a stronger dollar – it means just means they won’t take any direct steps to weaken it.

US dollar policy has generally been one of “benign neglect.” Back in the day, US Treasury Secretary Rubin (1995-99) would repeat ad nauseam the phrase “a strong dollar is in the best interest of the US” and the dollar would immediately go up a few pips. You can see from the graph that the currency did indeed appreciate during his tenure. The thing was, although he repeated this same phrase incessantly (it was referred to as “his mantra”), the administration didn’t do anything concrete specifically to boost the dollar, such as intervene in the FX market (as far as we know). It was just a statement of principle. Of course this was not the only reason why the dollar recovered from its early-1995 lows, but his comments – general and non-committal as they were – did help. 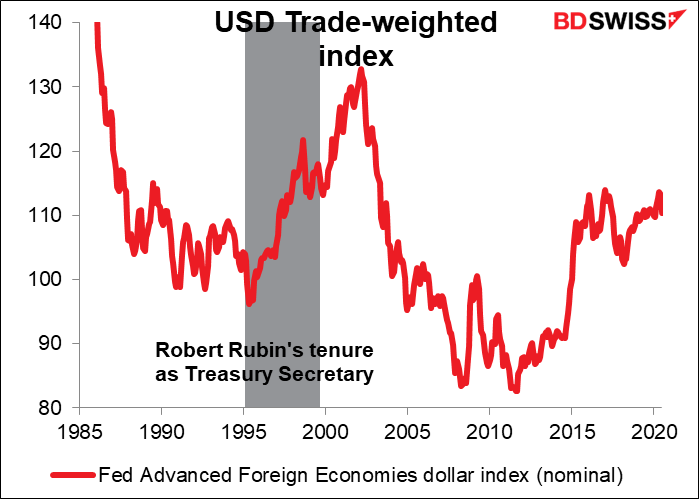 Subsequent Treasury Secretaries have been less vocal on the subject, and the outgoing one, Mnuchin, has barely said anything despite – or perhaps because of — his boss’ frequent interjections. He no doubt knew that Trump’s comments were contrary to official US policy and yet Trump would not be pleased to hear that, so he just kept quiet.

Meanwhile, the “risk-off” mood persists from Friday, when US equities fell on disappointing bank earnings and some expected opposition to President-elect Biden’s stimulus plan.

Not much on the schedule today as it’s Martin Luther King Jr’s birthday in the US, a federal holiday. So no US indicators. Also there are no European Central Bank (ECB) speakers as it’s in the “purdah” period ahead of Wednesday’s ECB meeting, nor any Fed speakers for the whole week for the same reason, ahead of the next Federal Open Market Committee (FOMC) meeting.

On this day it would be a good opportunity to watch Dr. King’s “I have a dream” speech from the March on Washington for Jobs and Freedom on August 28, 1963, in which he called for civil and economic rights and an end to racism in the United States. This may explain to people outside the US why his birthday is a national holiday -it’s incredibly moving. You can watch the full version (17 minutes), or there’s an abbreviated version with subtitles. There’s an abbreviated version in color. Or even just the last couple of minutes – the famous “I have a dream” section. Sadly, 70 years later his dream hasn’t yet been fully realized.

In the absence of any major indicators, the market will be watching today’s confidence vote on the Italian government. Bloomberg reported that PM Conte’s government is likely to survive the vote in the Lower House today, and former PM Renzi Sunday said that his 18 senators will probably abstain in any confidence vote in the Senate on Tuesday. That would probably be enough for PM Conte’s government to survive. The quick resolution of this issue could be a modest support for EUR.

Getting back to more prosaic matters, sight deposits at the Swiss National Bank (SNB) fell again last week, the seventh week out of eight that they had fallen. I wondered if they’d rise now that the new year has started and the seasonal demand for CHF went back to normal. But EUR/CHF was stable during the week too, so maybe not so much need to intervene. Given the fall in EUR/CHF during the latest week, it’ll be interesting to see if they finally rise (well, interesting to people like me who barely have any life to speak of outside of the FX market – I do hope some of you have more interesting things to do.) 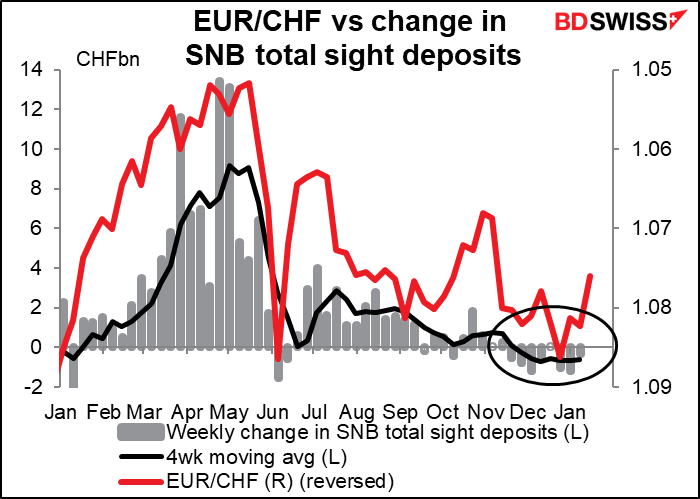 Canada’s housing starts are expected to be a bit lower, but that’s not a major concern, I should think. 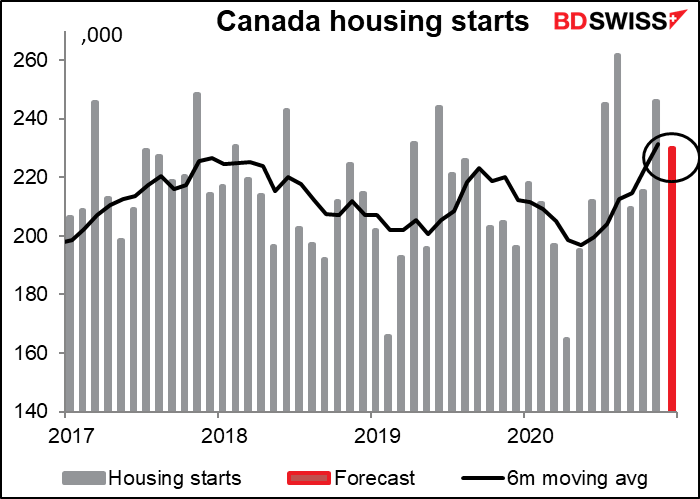 The pent-up demand from earlier in the year is now largely satisfied, I would guess. In any event on the consensus forecasts, starts for the entire year would still be up 3.7% from 2019 and 1.3% from 2018 to the highest level since 2006, before the pre-Global Financial Crisis. 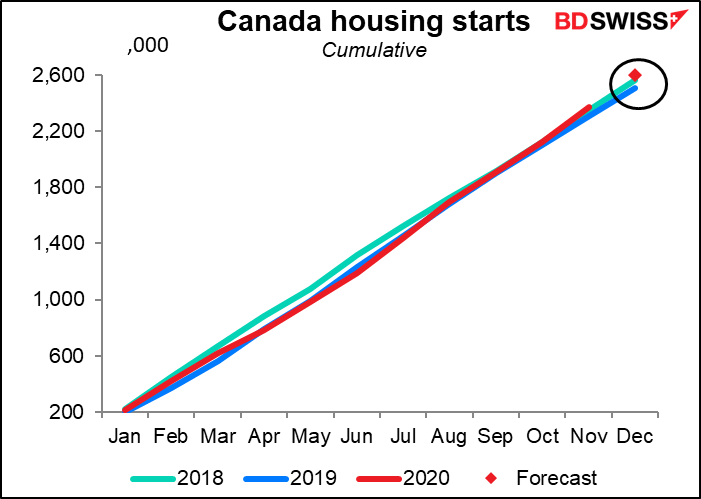 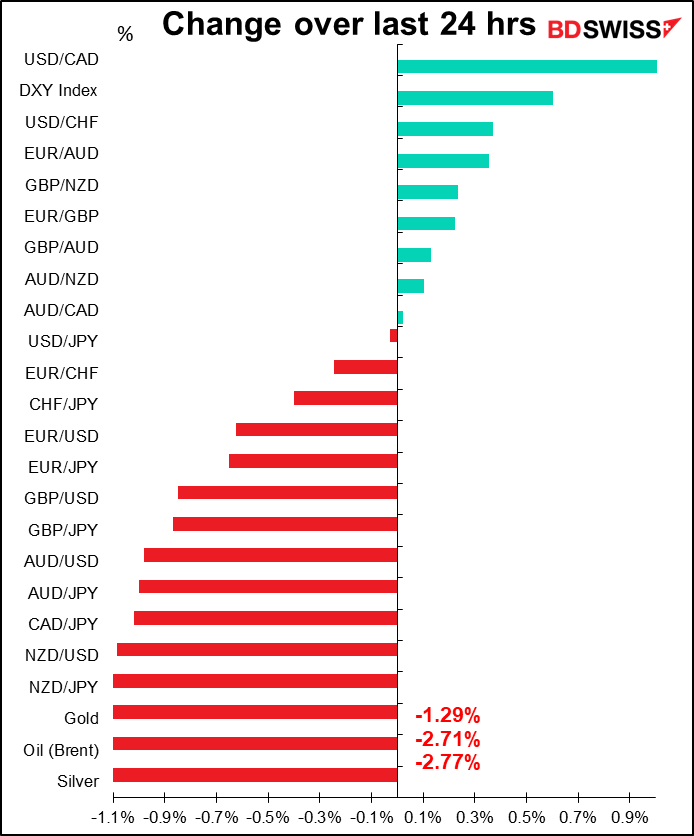 Italian Bond Yields Creep Up before Key Votes in Parliament

Dark Days are Far from Over Five Questions for ECB

Pharmacist, nurse, tow-truck driver and other jobs that pay $100K or more. This list might surprise you.

Over 1.7 Million Fords and Lincolns Are at Risk of Being Recalled

The ‘crying CEO’ says, ‘I’m just a small business owner — it’s not like I’ve got a fourth mansion.’

Pharmacist, nurse, tow-truck driver and other jobs that pay $100K or more. This list might surprise you.

Over 1.7 Million Fords and Lincolns Are at Risk of Being Recalled