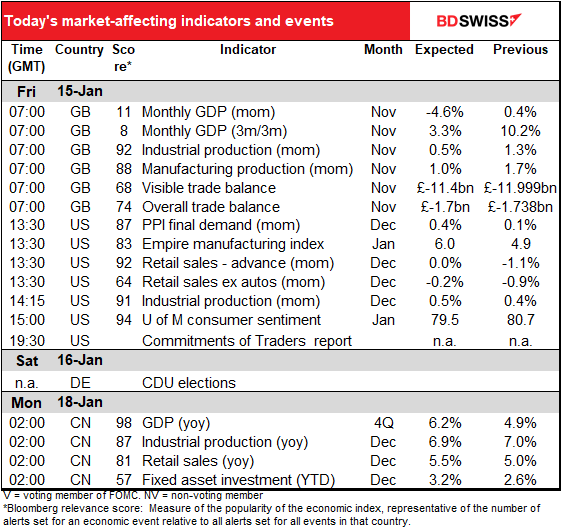 In addition to simmering problems in the US, we now have two matters concerning European politics that are important for the markets.

Germany’s Christian Democratic Union (CDU) party will vote Saturday on a new leader. The contestants are: a) Friedrich Merz, a millionaire businessman; b) Armin Laschet, governor of North Rhine-Westphalia, one of Germany’s biggest regions; and c). Norbert Rottgen, an MP and chairman of the Bundestag’s foreign affairs committee. The three are running neck-and-neck:one recent poll gave Merz 29% and Laschet and Rottgen both 25%. Chancellor Merkel will be retiring this year after 16 years in the post and so the winner of this election stands a good chance of being elected Chancellor at the Bundestag elections in September – or not, depending on how the party does then. (But there are other possibilities, too.)

Laschet and Rottgen seem to have pretty similar ideas that are not a million miles from Merkel’s current liberal policies, but Merz is different. Merkel won election after election mostly by co-opting the policies of the CDU’s more left-wing opponents. That won many liberal voters but left more conservative voters homeless while abandoning many of the principles that the CDU supposedly stood for. Merz wants to win back conservative voters who dislike Merkel’s liberal policies and have defected to the far-right Alternative for Germany (AfD) or simply stopped voting altogether. He’s more skeptical about European integration than the others are and says Germany needs to do more to “safeguard its interests” in the EU. For example, he opposed the EUR 500bn pandemic recovery fund, arguing that the EU as a whole raising money and distributing it to member states was “bumping against the limits of the (EU) treaties.” His views on immigration are of course different from Merkel’s too.

If he makes it to Chancellor – the leader of Europe’s largest country and therefore the de facto leader of Europe – it could slow the pace of European integration. That might have a detrimental impact on the euro.

On the other hand, by moving the party to the right, he might lose more centrist voters to the Greens and Social Democratic Party (SPD) than he would gain from the AfD. If that happened, the CDU might lose September’s election to a coalition of the Greens, SPD and the far-left Die Linke party. That could also shake confidence in the euro.

Meanwhile, Italian politics were thrown into disarray Wednesday after former PM Matteo Renzi withdrew three ministers from his small Italia Viva party from the coalition, due to dissatisfaction with its response to the pandemic. However yesterday the leaders of the two largest parties in the coalition, the Five Star Movement and the Democratic party (PD), strongly criticized Italia Viva’s decision and reaffirmed their support for PM Conte. That should make it easier for him to find new coalition members to fill the gap left by Italia Viva’s departure.

If he is unable to assemble a new majority, he may be forced to resign. In that case, President Sergio Mattarella would ask the largest parties in the current parliament to attempt to form a new coalition. President Mttarella could call for new elections, but the next general election is not scheduled until 2023 and few people expect him to call for earlier elections.

While the disarray in Italy may weigh on the euro somewhat, I think market participants are accustomed to dysfunctional Italian politics. Nonetheless, this issue could be contributing to EUR weakness (see below).

GBP was somehow the best-performing currency despite the mounting evidence that Brexit is turning out to be a disaster for trade. Fish are in the spotlight. The Brexit negotiations dragged on for months as the two sides focused intensely on fishing rights, but now that it’s all settled, it appears that the paperwork involved has doomed the trade – it now takes 26 key steps instead of a one-page form to export fish from Britain. As a result French fishmongers and seafood factories are suspending orders from Britain because the fish can’t be delivered in time. On the other hand, UK restaurants are closed so the catch can’t be sold domestically. Adding insult to injury, fishing minister Victoria Prentis admitted she didn’t read the fisheries deal when it was published on Christmas Eve because she was “very busy organizing the local Nativity trail.” She suggested that one solution would be for British people to eat more fish.

However, there was one bit of good news. The reprehensible miscreant MP Rees-Mogg, leader of the eurosceptic branch of the Conservative party, said in Parliament that “the key is we’ve got our fish back. They are now British fish, and they’re better and happier fish for it.” Maybe they’re happier because people will no longer bother trying to catch them.

If things are such a disaster in Britain, then why is the pound gaining? I think this may be one way in which the Italian debacle is manifesting itself in the FX market. Sterling has appreciated much more vs EUR (red line) than vs USD (blue line).

The relatively efficient roll-out of the vaccine in the UK – relative to Europe and the US that is, neither of which is a particularly high benchmark – may also be bolstering sterling. And there’s still some lingering benefit from Bank of England Gov. Bailey’s comments suggesting that negative rates are by no means imminent.

EUR also was hit by the several references in yesterday’s minutes to the December European Central Bank (ECB) meeting, where they repeatedly talked about paying “close attention to the role of the exchange rate in the inflation outlook.” However since the euro’s trade-weighted index is now lower than it was at the time of the meeting, I don’t see why that should be a concern now. I expect no concrete effort to depress the euro’s value at next week’s ECB meeting and therefore expect the currency to recover. 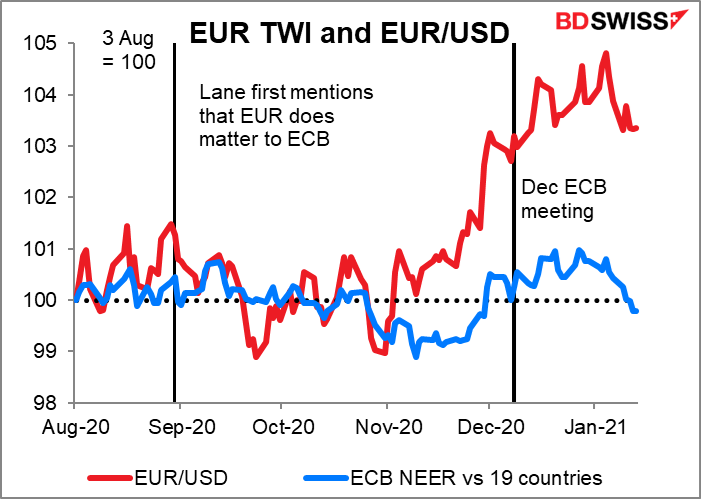 As for USD, once again the Treasury market was leading the FX market.

Treasuries didn’t react much yesterday to the alarming rise in initial jobless claims (965k, far above the market consensus forecast of 789k and the highest level since August) but then yields started to rise sharply. Although this coincided with comments by Fed Chair Powell, I think it had more to do with rising oil prices than his comments. 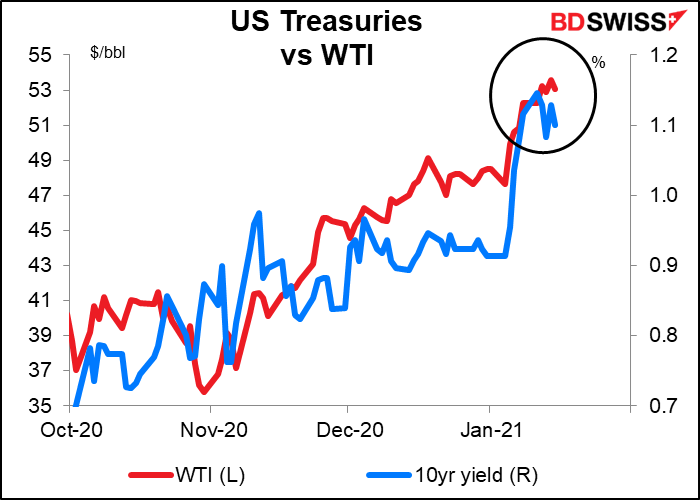 On the contrary, he joined other FOMC members in pushing back forcibly against the idea that the Fed would start tapering down its $120bn-a-month bond purchases any time soon. He said the Fed would need to see inflation exceed its 2% target for a while before acting in order for its new Average Inflation Targeting framework to be credible. On current estimates that’s not likely to happen for years — read my Weekly Outlook later today

Treasuries later got an additional boost after President-elect Biden outlined his $1.9tn stimulus plan, which includes direct payments to individuals, state and local government support, expanded federal unemployment payments, and provisions for large-scale virus testing capabilities and vaccine distribution. It’s so nice to have someone competent and interested in governing at the head of the government again!

The Q4 US earnings season starts in earnest today as some of the biggest US banks release their earnings. The consensus estimates for S&P 500 earnings per share (EPS) has been rising recently but is still below that of Q3 even though growth is stronger and the dollar weaker (which boosts dollar-denominated profits from overseas).

The European day has already started with the UK short-term statistics. They were mixed. On the one hand, GDP fell only 2.6% mom vs the 4.6% mom collapse that was expected. On the other hand, industrial production fell instead of rising as expected and the trade deficit blew up.

So you might as well have a leisurely breakfast while you wait for the US producer price index (PPI) to come across your screen. This follows Wednesday’s consumer price index, which was 1.4% yoy, a little higher than the 1.3% yoy that was expected. Prices are suddenly a hot issue nowadays as inflation expectations move up and a few Fed members talk about possibly beginning to “taper” their bond purchases in the second half of the year as the economy recovers. So this is going to be more closely watched than I would’ve expected. 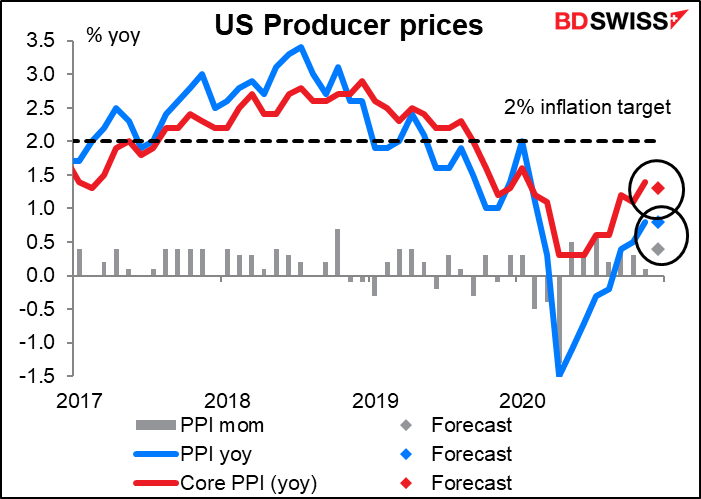 The Empire State manufacturing index is expected to rise slightly, as is next week’s Philadelphia Fed survey. “Unchanged” would probably be a better term for the small increases that are expected. That wouldn’t be so bad, given the disruptions from the virus. I think it would just confirm the view that most people have that the US economy is in a holding pattern – still expanding, but the pace of expansion is no longer increasing. That isn’t the kind of view that would justify the 19 bps increase in 10-year yields that we’ve seen so far this year. The markets are assuming a successful rollout of the vaccine and a strong recovery in the second half. I hope! 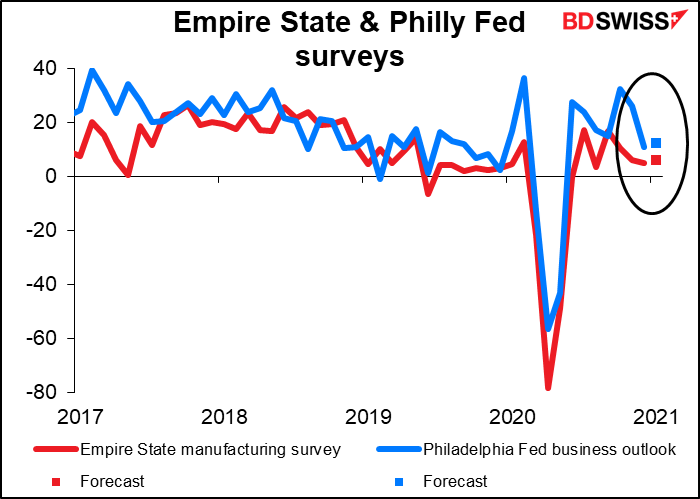 Now the big event of the day: US retail sales. That’s expected to show no growth at all as Covid-related restrictions probably dampened consumer activity. That would still leave retail sales in December 3.4% above the pre-pandemic level and so allow for Q4 to show significant growth.

Nonetheless I think no increase at all from the previous month would likely dampen expectations of US growth and therefore be negative for the dollar. 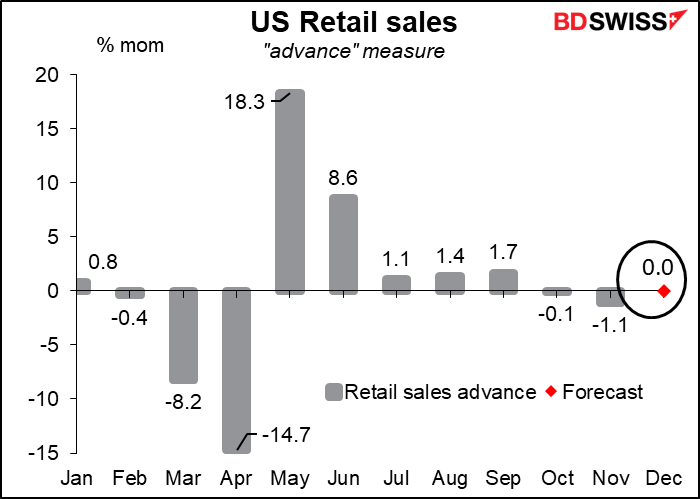 US industrial production however is expected to rise for the third consecutive month, as indicated by the increase in manufacturing hours worked in the December employment report. IP is less important for the FX market than retail sales, however. 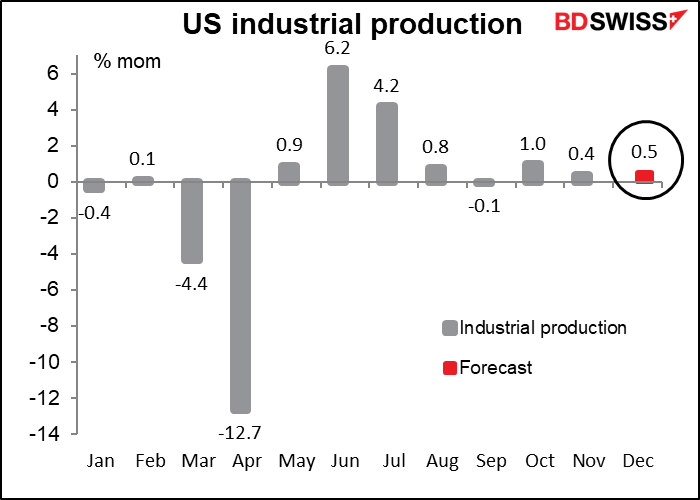 It will be riveting to see what the University of Michigan consumer sentiment survey has to say. 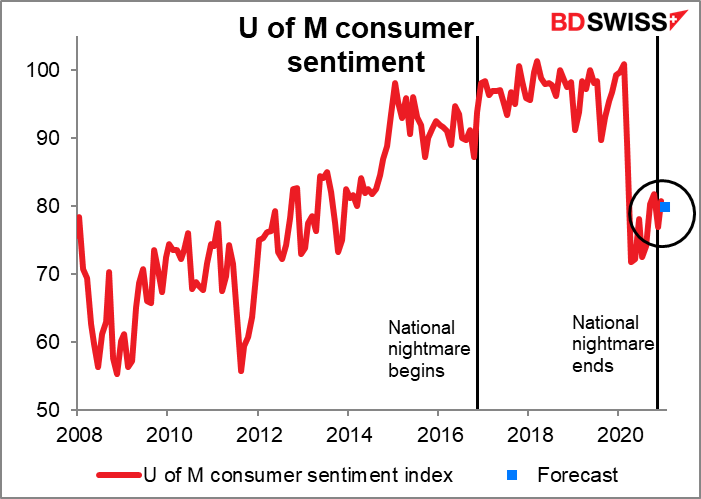 Sentiment in America depends to a large degree on whether your political party is in power. As you can imagine, a lot of people who are under the delusion that the election was “stolen” are going to be very depressed, while millions and millions of people are going to be utterly elated, delighted, dancing in the streets, etc. 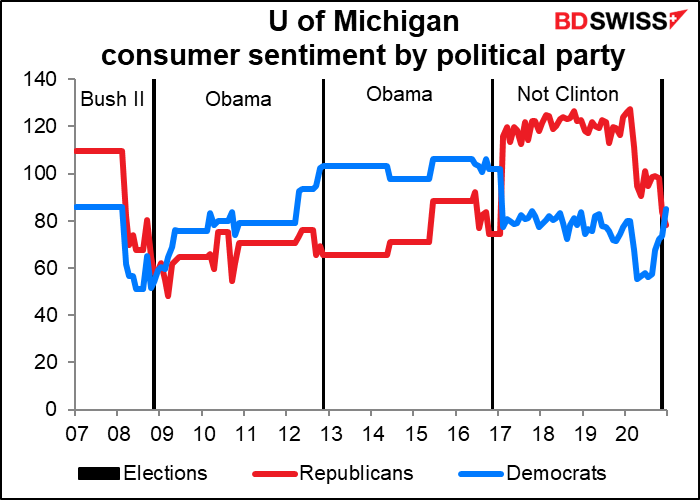 Then Monday morning, before you’ve gotten up, China will announce its usual trio of retail sales, industrial production and fixed-asset investment (FAI), plus this month we get Q4 GDP too.

GDP is expected to be up 6.4% yoy. That’s about what they plan on, so we can assume that they’ll hit their target. They usually do. 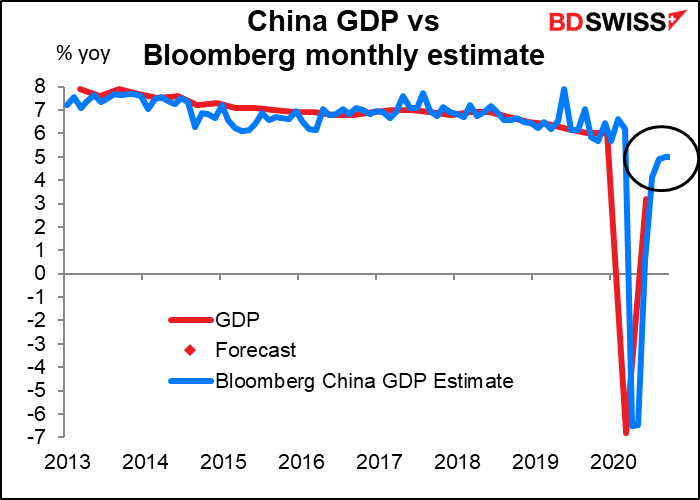 The other three are expected to show that everything’s right in the world. In particular, retail sales are forecast to accelerate slightly, which is good — they’re aiming for domestic-led growth. FAI is also predicted to speed up a bit. Industrial production on the other hand is forecast to grow at about the same pace as in the previous month, which I suppose is no bad thing, considering that last month’s 7.0% yoy growth was the fastest growth since March 2019. All in all the data should confirm the “risk-on” attitude in the market and be positive for AUD. 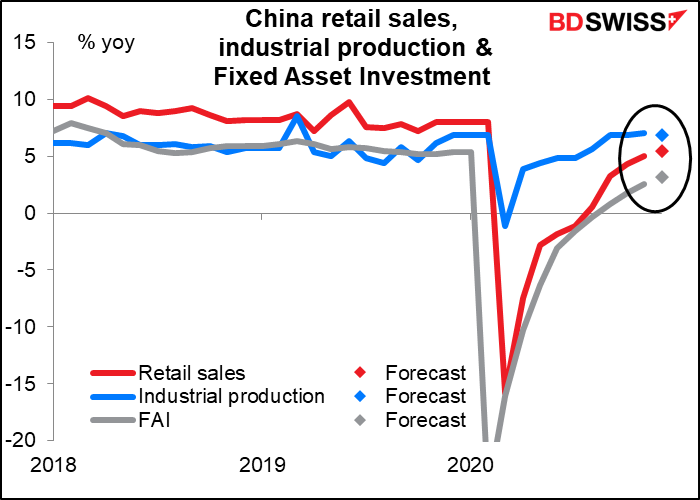 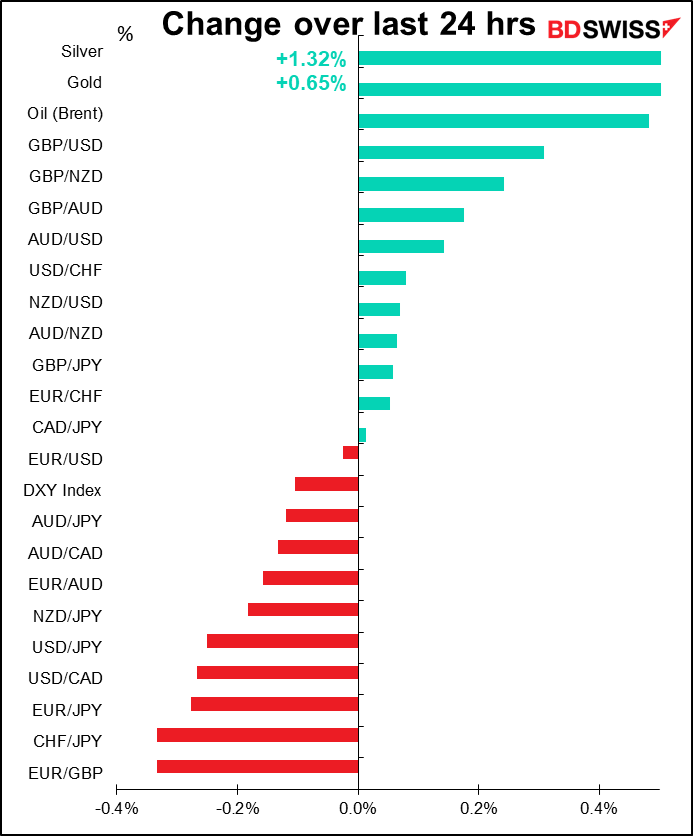 GBP Up on Weaker EUR, EUR Down on Italian Politics