By
Share
Stellar CTO and Ripple architect Jed McCaleb cashed out a whopping $411 million in XRP in 2020, according to an updated report from blockchain analytics account Whale Alert. McCaleb sold 1.2 billion XRP throughout the year at an average price of $0.34 per coin — amassing close to half a billion dollars. The sum reportedly represents 27% of McCaleb’s XRP stash that is held in a settlement account with Ripple Labs, and marks a sharp acceleration of his sales to date. He sold roughly one billion XRP in the five years between 2014 and 2019. 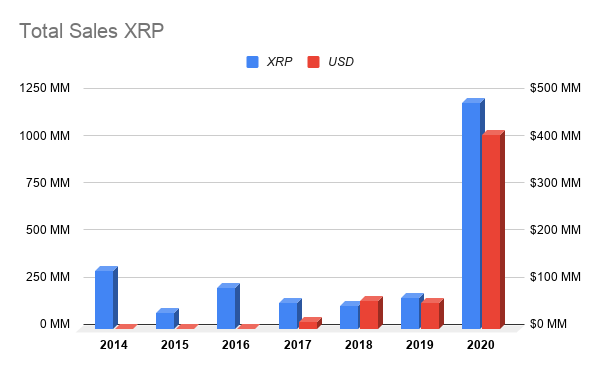 By Whale Alert’s estimations, the combined value of McCaleb’s current and liquidated XRP holdings is approximately $1.2 billion, placing him high on crypto’s rich list. McCaleb also appears to have timed his sales well, with Ripple currently facing lawsuits from both the SEC and from a major investor who participated in the firm’s $200 million Series C funding round in 2019.

McCaleb controversially received a co-founders reward of 9.5 billion XRP when he left Ripple Labs in 2014. During the same year, McCaleb signed an agreement with Ripple Labs that limited the amount of XRP he can sell per week in order to avoid negative pressure on the market. Despite receiving widespread criticism, McCaleb has repeatedly sought to assure investors that his selling has not impacted the price of XRP. McCaleb’s agreement with Ripple Labs comes to an end in 2023.

Bitcoin Mining Scheduled to Come Under Fire on Capital Hill

Bitcoin Mining Scheduled to Come Under Fire on Capital Hill