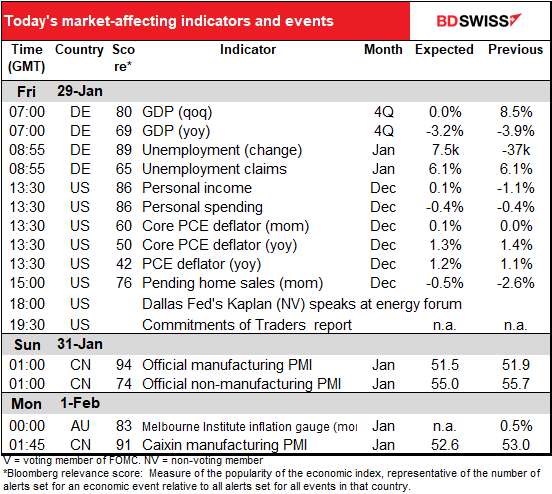 Well, the action certainly wasn’t in currencies yesterday! There was an unusually narrow range for currencies, while in the stock market, the story was definitely different.

Once again there was incredible volatility in GameStop and other darlings of the retail community. Several US retail brokers restricted trading in these stocks yesterday, saying that the volume of trade in such volatile stocks made them exceed their legal capital requirements. The move sparked a class-action lawsuit and calls from politicians to investigate the company involved, while the Senate Banking Committee said it would hold a hearing into the volatility.

GameStop’s share price ranged from $513 in pre-market trading to $112 at the lows before closing at $194 (not $197 as it shows on the graph). After the close, one the companies that had restricted trading said it would allow clients to make limited purchases of some of the shares that it had blocked. This sent it back up 61%.

This is the first stock move I’ve ever seen that has a song written about it (a sea shanty) (With thanks to Katie Martin of the FT for pointing this out on Twitter.)

The wave pushed silver up sharply after some people posted on wallstreetbets that silver would also be vulnerable to a short squeeze.. I’m at a loss to understand this as the Commitments of Traders Report shows that all types of market are long, except of course the producers, who sell their product forward to hedge. 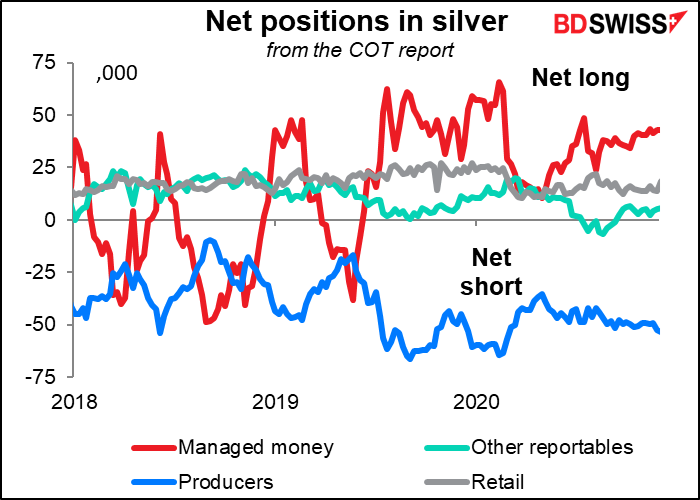 Despite the volatilty in a few stocks, the market overall managed to recover from their big falls on Wednesday, but has since given up the gains. The S&P 500 closed up 1.0%, although this was down from the peak of 2.1%. Stocks in Asia are once again down across the board. This may be caused in party by a cash squeeze in China, where the cost of overnight borrowing rose 28 bps to 3.33% today, the highest in almost six years, as lenders scramble for cash for end-of-month payments. The S&P 500 is indicated down 1.4%.

The speculative nature of the recent markets can be seen in the surge in volume in call options, which offer a highly leveraged way into the market with limited downside risk but unlimited upside potential. Volume hit a record high Wednesday of 37.8mn calls traded. Trading in calls this month has averaged about double trading last January. 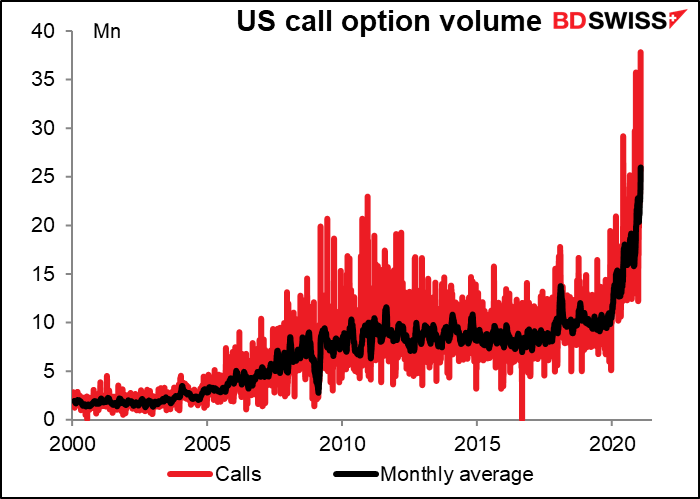 One reason trading in these stocks has surged is because new online brokers offer commission-free trading. How can they afford that? They make money by selling information on their order flow to High Frequency Trading (HFT) hedge funds, which can make money off of it. (Just how they do that is difficult to explain, but let’s just say you can make a lot of money if you know even microseconds beforehand what orders are going to hit the market. Read Flash Boys: A Wall Street Revolt if you’re interested.) Since one of these hedge funds that was buying this order flow also paid billions of dollars to bail out another fund that had been shorting GameStop, many people were outraged at the stoppage. The hedge fund denied up and down that it had anything to do with the trading stop however.

The whole episode is nothing really new. It’s just that this time it’s the small retail investors sticking it to large institutional players and not the other way around. Remember Bear Sterns? Or Lehman Bros.? One of the reasons that they went bust – precipitating a global financial crisis that put millions of people out of work for years – is that the big Wall Street firms knew that these firms were in trouble and ganged up on them to force down the price of assets that they were desperately trying to sell to raise money to keep afloat. The details are different but the idea is the same: taking advantage of a firm that’s in a difficult position to force it to trade in such a way that you make money.

And certainly there’s nothing new (or wrong) about momentum strategies – buying what’s going up simply because it’s going up. That’s the whole basis for technical analysis.

Also, the retail investors were organized through public social media, rather than Bloomberg messages or private chat lines (e.g. back in 2014 six banks were fined $4.3bn for colluding in private chat rooms). Unlike such collusion, this is perfectly legal as anyone is allowed to encourage others to follow their trading. That’s different from agreeing to follow each others’ trading. What happened was like the “Arab Spring” of 2010/11 or other instances where social media allowed individuals to usurp power that was previously in the hands of an elite. Thousands of individuals discussing strategy and acting in unison created a kind of “virtual hedge fund” that bested the professionals at their game. This could be a game-changer for the financial markets, at least temporarily. Fundamental analysis of equities and “value investing” would go out the window in favor of scraping chat rooms and watching Twitter for chatter & market rumors.

You also have to wonder about a so-called “hedge fund” that can go bust because of a short squeeze in one stock. Don’t these highly paid geniuses have any risk management? What are their investors paying 2 20 (2% management fee 20% of the profits) for? (See When Genius Failed: The Rise and Fall of Long-Term Capital Management, the story of a hedge fund with two Nobel Prize-winning economists that similarly went bust from doing stupid trades). Apparently being smart doesn’t prevent you from doing stupid things. Ask my wife, for example.

How will this affect markets going forward? It’s difficult to tell. On the one hand, there must have been a lot of retail investors who made a lot of money buying GME on the way up. They’re likely to want to keep playing the game. At the same time, the huge losses suffered by the short side will make professional investors less likely to try that strategy again. The result could provide more support to the market overall.

On the other hand, there must be a lot of small investors who lost money buying at the peak or buying on the way down. They may stop investing entirely, which would tend to slow the market’s rise.

We discussed German GDP yesterday. French GDP was much better than expected (-1.3% qoq vs -4.0% expected).

German unemployment is expected to show little change. The unemployment rate is expected to hold steady for the third month in a row, while unemployment claims – the number of newly unemployed people – is expected to rise by a small 7.5k. Given the toll that the virus has taken on the German economy and the increasingly severe lockdown that they’ve had, I think this would be a fairly good result. EUR-neutral 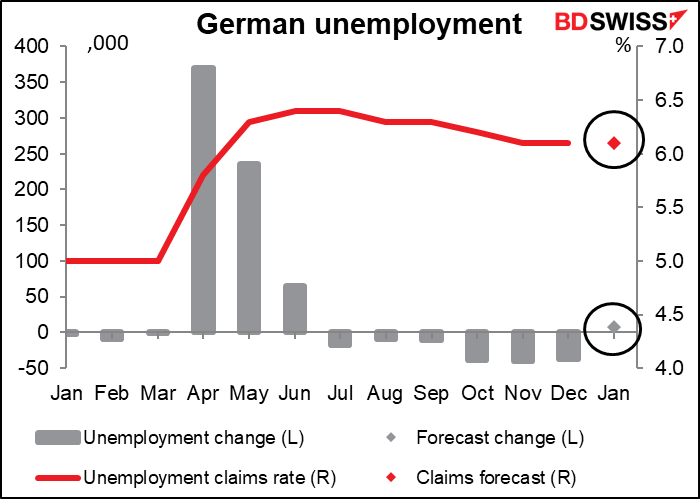 US personal income is expected to be up a bit while personal spending is forecast to be down a few bits. While this is all very interesting, the future of income & spending depends a great deal on the ultimate size of the Biden administration’s fiscal package, so the January figures don’t necessarily give us much insight into what’s likely to happen. 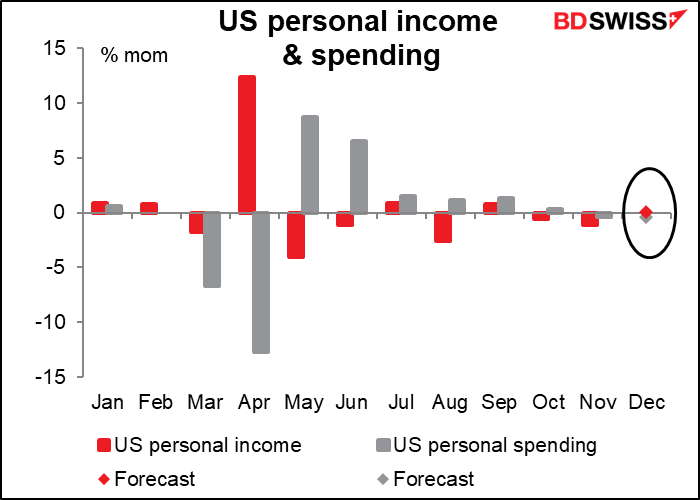 In that case, the personal consumption expenditure (PCE) deflators might be the more important of the two, seeing as they’re the Fed’s preferred inflation gauges. Having said that, there’s not much of interest here – a tiny uptick in the headline rate of inflation but no change in core, which is the more important of the two – and both expected to remain well below the Fed’s minimum target of 2%, much less exceed it, as they hope 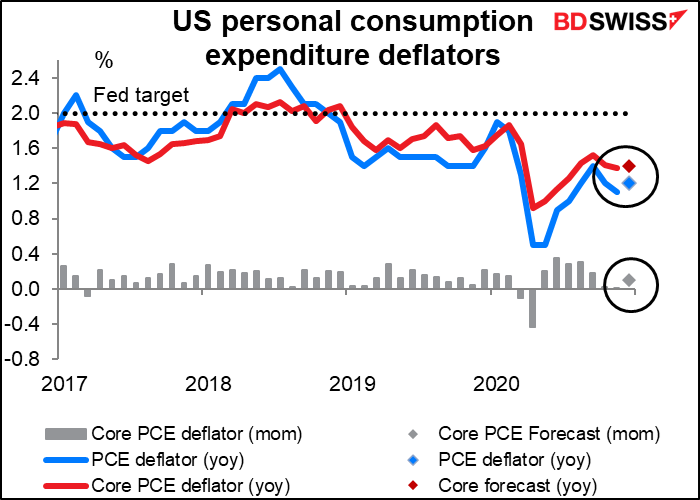 US inflation expectations had been rising recently, but they’ve leveled off in the last week or so. These figures should add to the evidence that there’s no surge of inflation in the US. That could be positive for the dollar if it means inflation expectations come down, thereby boosting real yields. On the other hand, it could also be negative for the dollar if it makes people think the Fed is likely to keep rates & its bond purchases unchanged for longer. No doubt the market will interpret it whichever way it wants, thanks to the magic of confirmation bias – a bias that behavioral finance tells us inclines people to interpret information in such a way as to confirm whatever they already think. 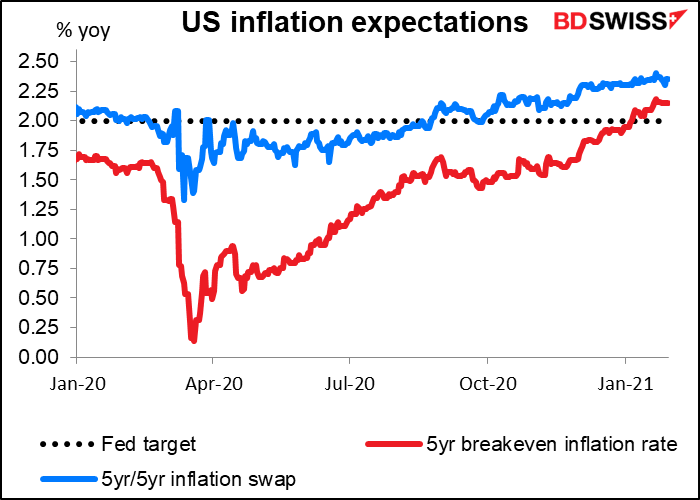 Over the weekend, China announces its official purchasing managers indices (PMI), while Caixin/Markit announce their manufacturing PMI. They’re all expected to decline a bit (both manufacturing PMIs are forecast to fall 0.4 point, the service-sector PMI a larger 0.7 point) but to remain in expansionary territory. That suggests the recent virus outbreaks have had an effect on the economy, particularly in the service sector – a pattern we’ve seen borne out around the world recently. 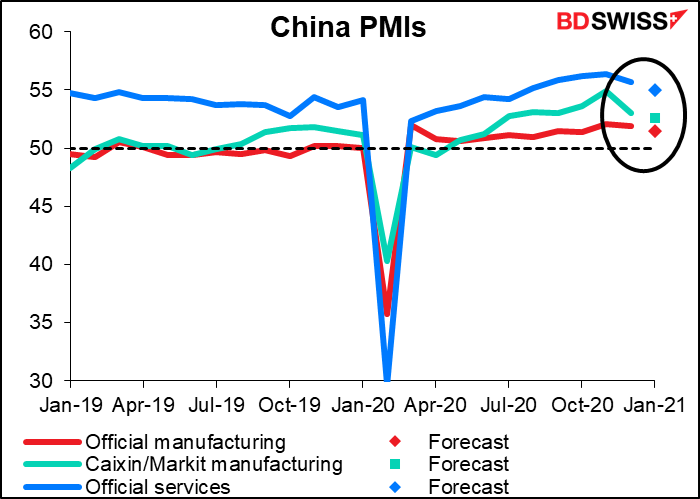 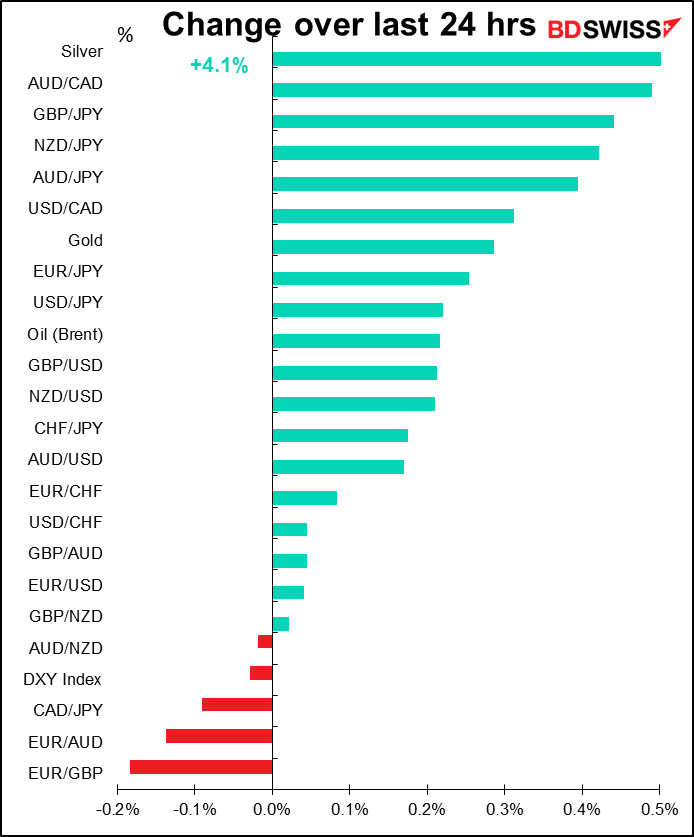