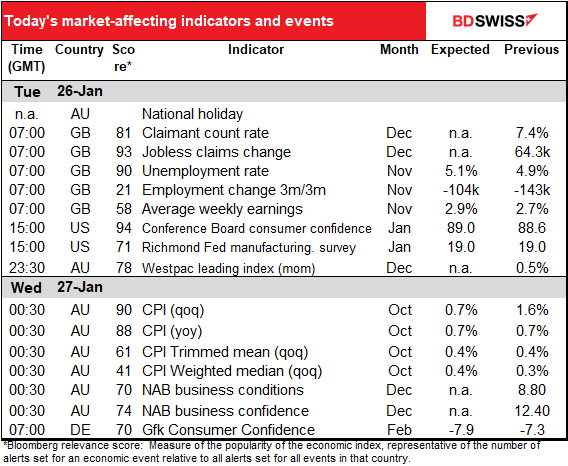 Currencies are grouped today in the usual “risk-off” formation, with USD and JPY at the top and the commodity currencies at the bottom. The cause though is somewhat of a mystery.

US stocks opened higher, but around mid-morning they plunged, but gradually recovered during the day to close modestly higher (S&P 500 0.4%, NASDAQ 0.7%). Explanations for the drop ranged from a) stretched valuations, with the market hitting all-time highs ahead of earnings this week, to b) month-end portfolio rebalancing out of stocks and into bonds, to c) concerns that the US fiscal stimulus plan would be reduced in the Senate or delayed until March, or d) the end of regional stay-at-home orders in California, which hit technology/work-from-home stocks.

US stocks are indicated down 0.6% this morning.

European stocks closed lower yesterday (Euro Stoxx 50 -1.4%) as they finished trading before the US market recovered.

Stocks are being whipped around by retail traders who follow tips on various online chat rooms, rather than reading Wall Street brokerage reports that focus on traditional metrics such as earnings per share (EPS) or Earnings Before Interest, Taxes, Depreciation, and Amortization (EBITDA) like professional investors do. Move over, Tesla – GameStop is up 614% since the end of October, 308% this year. Yesterday alone it was up 146% in one day at the peak before closing up 18%. Even Blackberry – remember them? – is up 302% since end-October. They too were up 48% in one day yesterday before closing up 28%. This is so redolent of 1999/2000, when adding “.com” after a company’s name would double its share price overnight.

The real show though was in the Treasury market, where there was a dramatic bull-flattening rally — US 10-year yields declined 7 bps with the yield curve flattening accordingly. 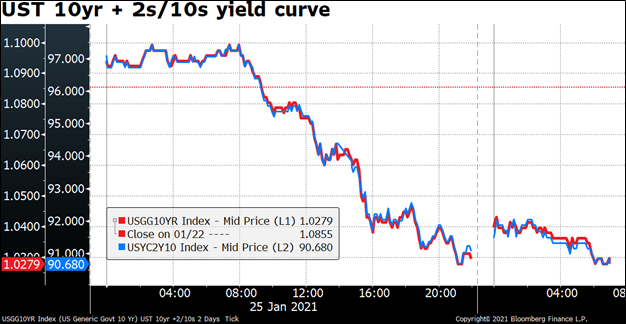 Breakeven inflation rates didn’t move that much, meaning that as nominal yields declined, real yields declined sharply too. The dollar’s resilience in the face of this sharp decline in real yields was notable. This may have been due to the “risk-off” mood, or perhaps a function of EUR weakness in response to yesterday’s disappointing Ifo indices (both current situation and expectations missed forecasts). 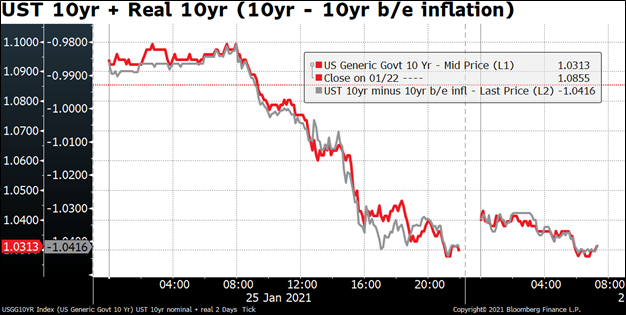 The Italian political crisis deepened as PM Giuseppe Conte will resign today rather than face a vote in the upper house tomorrow that he risks losing, which would force his departure. After resigning, he’s then expected to attempt to form a new government within the existing parliament. He may be able to achieve that as the leader of the Democratic Party immediately signaled he’s support Conte in a new pro-EU government. However if Conte is unable to form a new majority, then Italian President Mattarella will ask the leaders of Italy’s political parties to find a solution without him. Another possibility would be for the current coalition parties and the right-wing opposition to form a broader coalition of “national unity,” which could be led by a technocratic prime minister with a mandate to steer Italy out of the current crisis. New general elections are unlikely because of the difficulty of holding them during the pandemic.

However, it appears that the market thinks this is a good move, as Italian bond spreads over Germany tightened yesterday. It may be that people think Conte will be successful in forming a new, stronger pro-EU government that will find some way out of the various crises that the country faces. 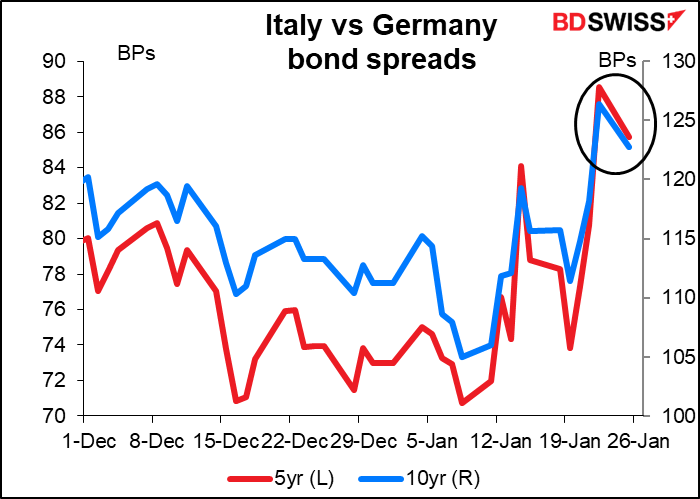 Separately, anti-curfew protests turned into riots in several Dutch cities. The pandemic is getting on peoples’ nerves. 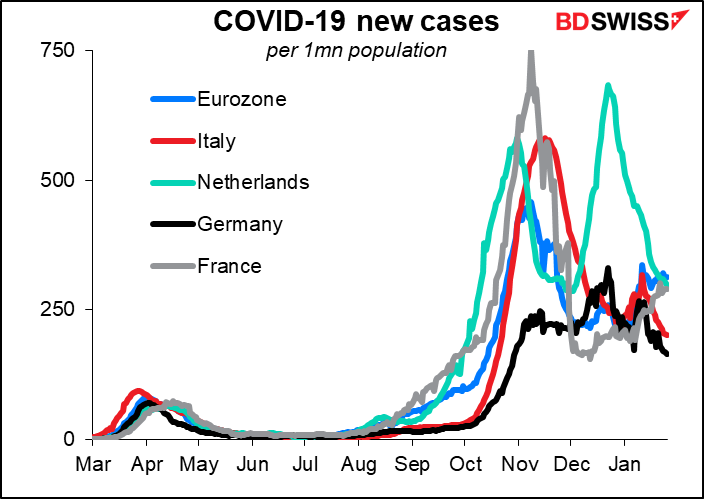 We discussed the UK employment data yesterday. The results were better than expected, with the unemployment rate not rising quite as high and the number of people losing their jobs a bit less than expected.

The Conference Board consumer confidence index is expected to be largely unchanged. The U of M version of this indicator rose in December but fell back a bit in January. Both have been going sideways since the initial drop in April, or perhaps I should say slowly trending higher since then but with a distinctly “two steps forward, one step backward” approach. 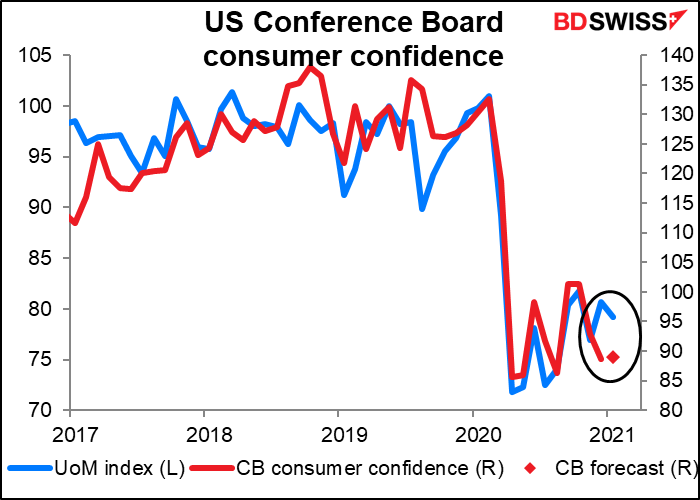 The only other indicator on the schedule during the US day is the Richmond Fed survey. The Bloomberg relevance score shows that the market doesn’t watch it as closely as it does the Empire State or Philly Fed indices, but investors certainly should: my research shows that among the five regional Fed surveys, it’s the best correlated with the Institute of Supply Management (ISM) manufacturing survey, which is what people are trying to forecast. (It doesn’t have much power at explaining the Markit manufacturing PMI however – the only one that’s good at that is the Empire State survey.)

The index is expected to be unchanged. The Empire State index was down slightly (3.50 from 4.90) but the Philadelphia Fed index jumped (26.50 from 9.10). Unchanged is as good a guess as any, perhaps a bit pessimistic. We could have an upside surprise 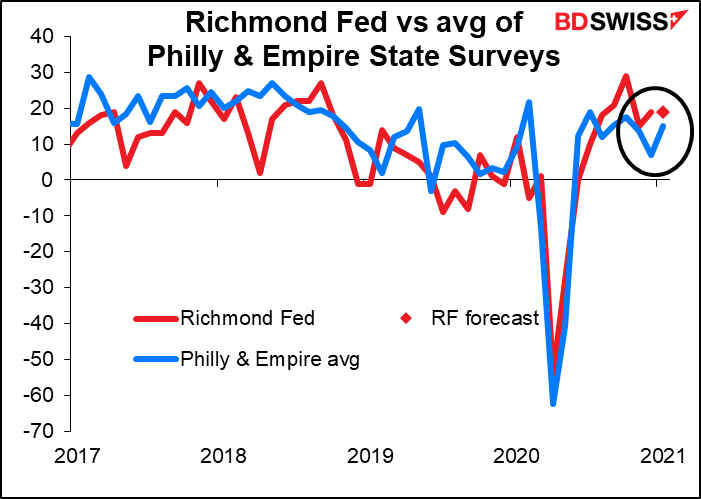 Overnight we get the Australian consumer price index (CPI). Australia only releases its CPI quarterly, so it’s a bigger deal than it is for most other countries

It’s expected to be unchanged on a yoy basis, as is the “weighted median” index, while the “trimmed mean” is expected to show inflation slowing a bit on a yoy basis. Whichever one you want to look at, inflation isn’t returning back to normal yet. That could help to keep the Reserve Bank of Australia (RBA) on hold when it meets a week from today (Feb. 2). It would therefore be negative for AUD. 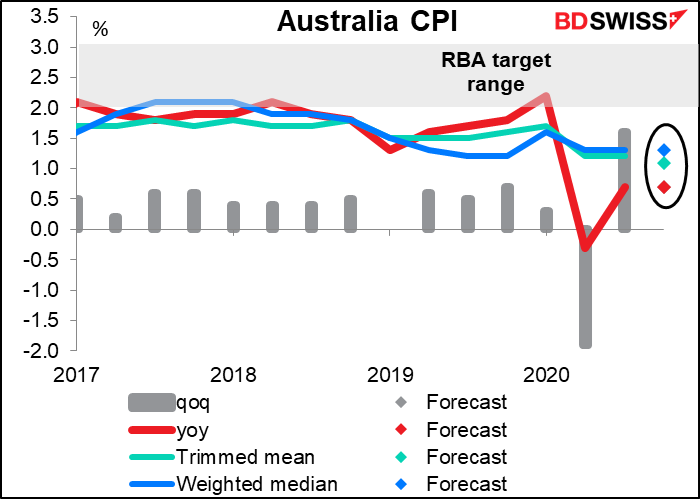 There’s no forecast for the National Australia Bank business indicators, but sometimes they move the market anyway, so I’m going to throw in a graph for free. Such a deal! 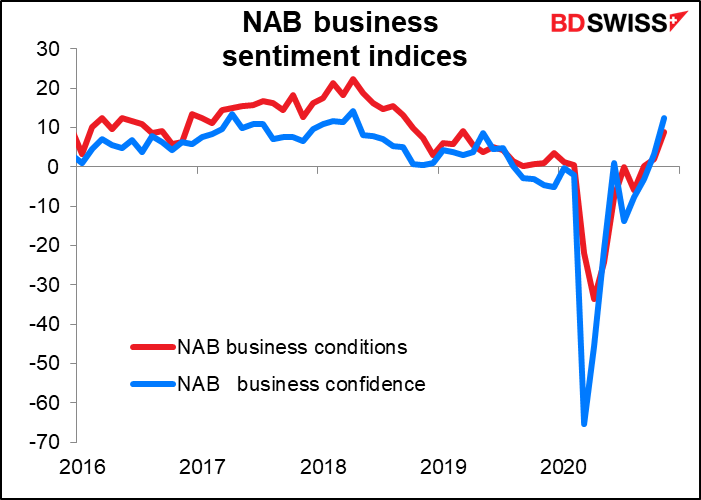 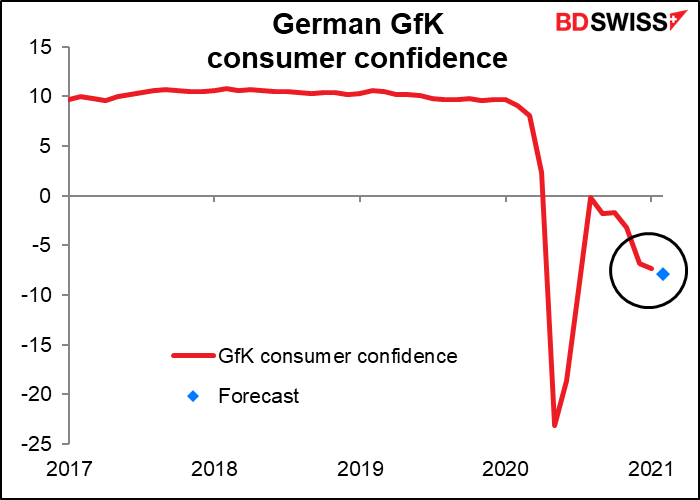 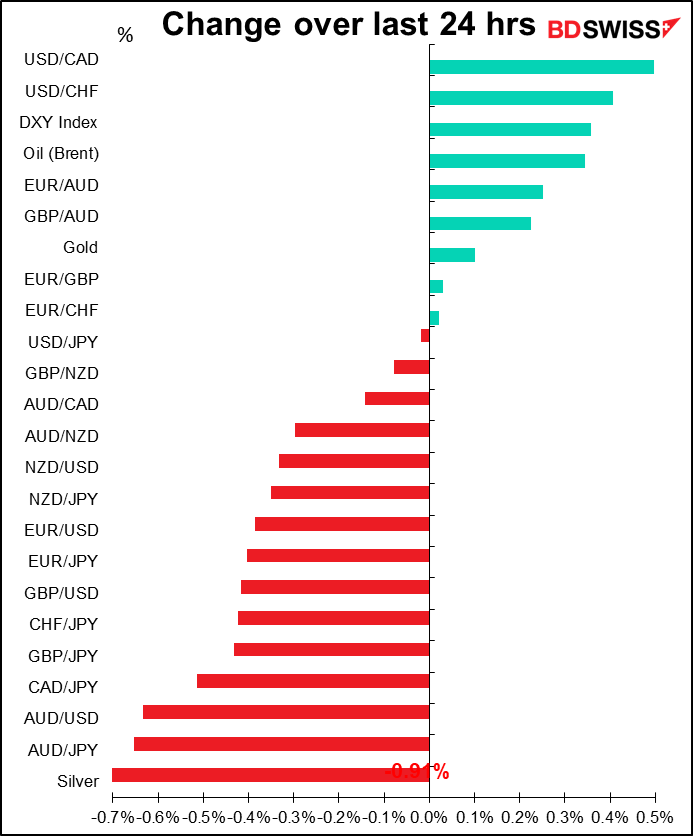 Rules That Warren Buffett Lives By