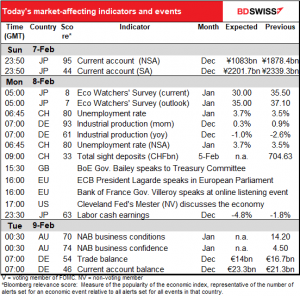 It’s a “risk-on” day, with stock markets soaring again, and finally the FX market is reacting as usual: the commodity currencies up, led by AUD, and JPY and CHF lower, with USD at the bottom of the pack.

The story behind the move is simple but strange: “bad news is good news.” Friday’s US nonfarm payrolls missed expectations, with payrolls rising only a meager 49k vs 105k expected. But signs that the US job market is stalling just increased pressure for a large fiscal rescue package ASAP. Treasury Secretary Yellen said that the US job market is “stalling” and the US needs a big package quickly. Leaders in the US House of Representatives said they could vote on the package the week of Feb. 22nd, if not sooner, and said they would use a method of passing the legislation that averts the possibility of the Republicans blocking it.

Expectations of a large package quickly have caused the US yield curve to steepen and breakeven inflation rates to rise. Two-year yields fell 1 bps to end the day at a record low 0.10% while 10-year yields rose 2.4 bps (and a further 2.3 this morning). 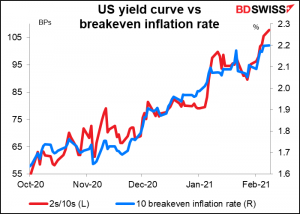 Surprisingly though the higher US yields failed to support USD, perhaps because of the weak US jobs report.

AUD rose throughout the US day Friday even after a surprisingly dovish speech (well, surprising to me at least) by Reserve Bank of Australia (RBA) Gov. Lowe, who said he expected policy rates to remain at the lower bound until 2024 at the earliest (even in the central bank’s upside scenario) and didn’t rule extending the RBA’s quantitative easing program again in the future. Higher commodity prices and (slightly) better-than-expected Q4 retail sales in Australia supported the currency. 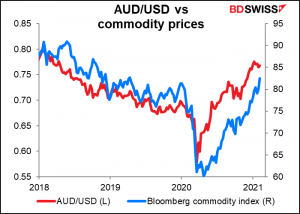 The big risk for today: there was an article in the FT that said South Africa had stopped rollout of the Oxford/AstraZeneca vaccine after finding that it does not protect against “mild/moderate” illness from the South African mutation of the Covid-19 virus. The disappointing results could raise doubts about how quickly the world will return to normal, which might spark a major “risk-off” move. However the report certainly hasn’t dampened enthusiasm this morning as most Asian markets are up, with the TOPIX up 1.8%, the CSI 300 up 1.3% and the Hang Seng 0.3%.

The European day started with Swiss unemployment (not a big market mover) and German industrial production, which is important. German IP was disappointing: unchanged mom vs expectations of 0.3%.

Now it’s Swiss sight deposits, just to see whether the Swiss National Bank (SNB) is intervening, and if so, how much. Deposits have increased for the last three weeks, but the last two were relatively small, consistent with EUR/CHF staying at the current level pretty much by itself. 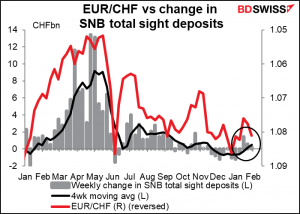 And that’s about it for today except for some speeches, which probably won’t be all that exciting anyway. Bank of England Gov. Bailey just gave a press conference last week (although the transmission was terrible) and ECB President Lagarde speaks all the time. Bank of France Gov. Villeroy just spoke on Jan. 26th and 27th, while Cleveland Fed President Mester just spoke last week, so I doubt if either will say anything new.

Overnight Japan releases its labor cash earnings, a data series that should be of interest to the market but isn’t particularly. 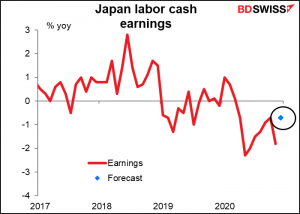 There are never forecasts for the National Australia Bank business indicators, but they sometimes move the market anyway. 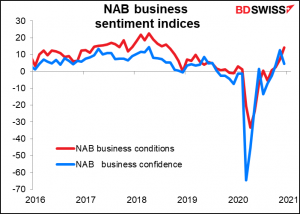 And rounding out our discussion of economic indicators that no one cares about, the European day Tuesday starts with German trade and current account. The trade surplus is expected to be lower but the current account surplus higher. This is the December figure; the interesting data will be from next month, when we can see the impact of the Brexit agreement (if any). 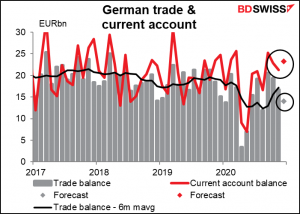 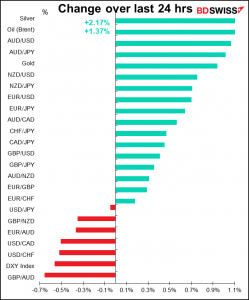 Bitcoin and Other Cryptocurrencies Slump as China Crackdown Continues

Text size China accounts for two-thirds of Bitcoin mining activities, according to the University of ...
By
3 hours ago

The Dow Is Finally Rebounding. 5 Stocks That Are on the Move.

Text size Stocks look set for a higher open as the market rebounds from a ...
By
3 hours ago

Why Cisco Stock Could Double From Here

Text size Cisco is well-positioned to benefit from an expected acceleration in enterprise tech spending. ...
By
3 hours ago

Raymond James: These 2 Stocks Could Spike Over 50%

Taiwan Semi Shares Are Falling Because Gross Margins Could Slip

The Dow Is Finally Rebounding. 5 Stocks That Are on the Move.

Bitcoin and Other Cryptocurrencies Slump as China Crackdown Continues